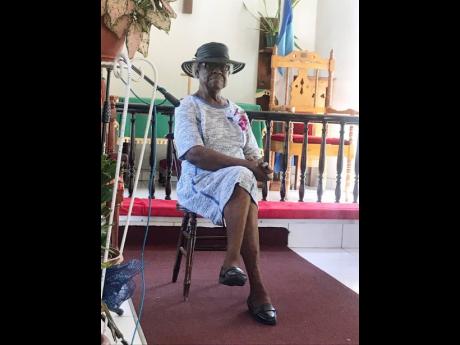 Contributed
Elana Nisbett, the 89-year-old retired assistant superintendent of police who perished in a Hanover house fire on Monday.

RETIRED ASSISTANT Superintendent of Police Elana Nisbett was burnt to death in a fire that destroyed her home in Hopewell, Hanover, on Monday morning.

When the fire subsided, grieving onlookers gathered at the 89-year-old’s 12-bedroom dwelling at Bamboo Drive.

Reports are that shortly after 3:30 a.m., residents saw fire coming from the house and alerted the Hanover Fire Department. Two units and an ambulance responded to the call.

Firemen cut the lock from the grille to gain entry to Nisbett’s house and it took more than an hour to get the blaze under control.

An investigation has since been launched by the fire department and the police to determine the cause of the fire.

Nisbett served as an assistant superintendent of police in St James after joining the force in 1960, a High Command statement issued on Monday said.

The cop had been stationed in St Elizabeth during her early years, after which she was transferred to St James, where she ended her 33 years of dedication to the constabulary.