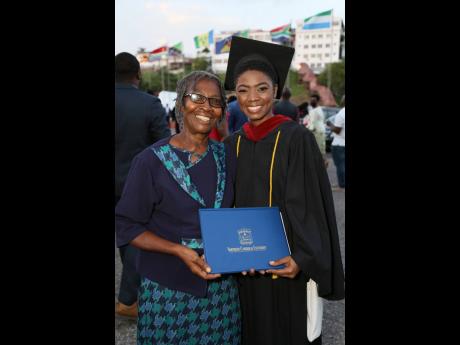 Nathaniel Stewart/Photographer
Roxanne White (right) celebrates with her mother, Beryl Morgan, after receiving a Bachelor of Arts in Communication Studies from Northern Caribbean University on Sunday. 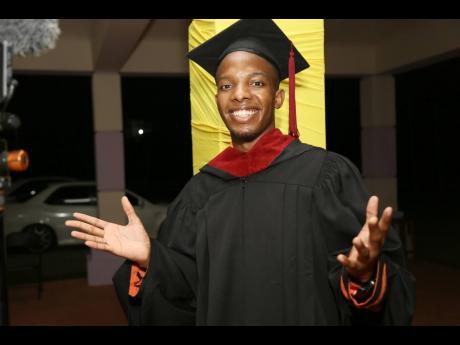 Nathaniel Stewart/Photographer
Trench Town native Terrain Wright, who graduated from Northern Caribbean University with a Bachelor of Arts in Communication Studies, on Sunday, noted that although he might have been a late starter, his acheivement is a reminder that good can come from the troubled Kingston inner-city community.
1
2

Wright, who was among 574 students who graduated from the Mandeville, Manchester-based institution on the weekend, is also a gold award recipient, having maintained a grade point average of at least 3.5.

The 23-year-old, who has completed a Bachelor of Arts in Communication Studies, specialising in public relations, flashed a broad smile as he spoke with The Gleaner about his journey.

Having moved to Mandeville a few years ago, he said that growing up in volatile Trench Town was no easy feat, but credits his family for steering him along the right path.

“You had to deal with the harsh reality of violence. I've personally come close to gunmen already, but luckily for me and with the guidance of my family and parents I didn't pursue such a lifestyle, but I could have been one of those individuals,” Wright said.

He believes the change in environment facilitated the turnaround in his academic performance.

“I didn't have to be focusing on some of the things that were happening in my [previous] environment like the crime and violence, because those can be very distracting, so the [new] environment really helped in my growth,” Wright told The Gleaner.

And residents of Trench Town have been proud of the strides he is making.

“They always say, 'Coming from Trench Town, you're showing the better side of us.' They always encourage me to keep my head up and to keep representing Trench Town and show that it's not about the area, but about you and what you can do,” he said.

Wright, the male burgundy jacket holder of the Department of Communications, shared the glory with his debate coach, Roxanne White, the female jacket holder for the department. Both of them have copped multiple awards and have represented the university overseas.

The jacket holder is a high-achieving top performer, who is also dubbed an ambassador for the department or faculty.

The 31-year-old told The Gleaner that after many failed attempts to convince her to apply, someone who believed in her capabilities sent in an application to NCU on her behalf.

“When I got the first set of [acceptance] emails, I did not pay it any mind because I never applied, so as far as I was concerned, they mistakenly set it to me. There must have been another Roxanne White,” she said.

White said, however, that the acceptance was a godsend as all her other pursuits were futile.

“My mom said to me, 'Maybe God is the one calling you to NCU',” she revealed.

But her “calling” was not without challenges, including having to deal with the death of a close relative and being robbed of her car and laptop by masked gunmen. The latter left her traumatised, and the mask mandate following the COVID-19 outbreak added to the trauma.

“When COVID came and I had to encounter people in masks all the time, it was a constant trigger for me,” she related.

However, with the support of her “top-tier squad”, White said that she was able to manoeuvre the woes and triumph over adversities.