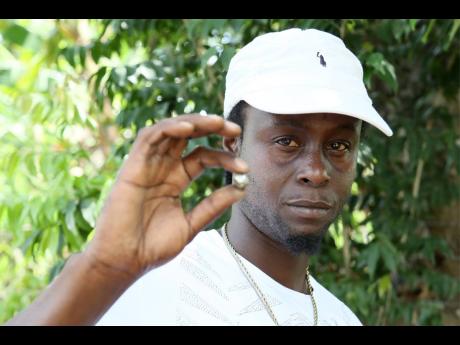 A tailwind of excitement in Crofts Hill, northern Clarendon, over the discovery of presumed gold traces and pyrite is being met with caution by local and international companies that are insisting that nothing conclusive has come of exploratory...

A tailwind of excitement in Crofts Hill, northern Clarendon, over the discovery of presumed gold traces and pyrite is being met with caution by local and international companies that are insisting that nothing conclusive has come of exploratory work done so far.

Works being carried out by Canada-based mining exploration company C3 Metals Inc and Geophyxs Jamaica, through separate operations, have raised the antennas of residents, increasing speculation that communities within the parish’s northern belt might have reserves of gold and other valuable minerals.

The two companies have obtained special exclusive prospecting licences to explore the area and its environs for gold, as well as copper and other minerals.

An increase in mapping and boots on the ground by C3 Minerals and the hiring of men in the community to assist with the collection of soil samples have heightened anticipation that discovery of deposits of value is on the horizon.

“There are serious things happening in Clarendon which people need to know about,” Crofts Hill resident Windon Simpson told The Gleaner last Wednesday during a visit to the community.

“There are companies here taking soil samples, digging the earth searching for gold, copper, and other earth minerals which Jamaica says there’s none here,” he added.

Simpson said foreigners have identified and marked sections of the community and have indicated to residents that they have further interest in exploration, but have been coy in what they share.

Leroy Elson told The Gleaner that he was approached by men linked to C3 Minerals who informed him that they are in search of precious metals.

“But gold a the last thing them mention to me, so them a do like them want to hide it from us like them nuh know say it is here.

“Them say after them take the samples and go lab and test and see what them get out of it, then the Government a go come in and whosoever have papers (land titles) have talk,” Elson said.

But Stephen Hughes, vice president of exploration at C3 Minerals, told The Gleaner that it is early days and that there has been no discovery.

Hughes said a team operating south of the town in Crofts Hill has been doing surface exploration and mapping, which is expected to be completed by year end.

He said that it will take months for the results of samples taken to come back.

“Is there pyrite? Yeah, there’s pyrite all over the island, but it doesn’t mean anything. It’s not gold,” said Hughes.

Hughes said mineral exploration is usually done until the team strikes a discovery. That’s followed by a process called delineation drilling. A feasibility study is then conducted to determine whether it is economically viable to proceed.

“We are really in the early stages of surface drilling exploration,” he said.

Asked who benefits in the event of a discovery, Hughes said “everybody”, referencing community programmes the company has implemented to benefit residents.

“We don’t make any money in the exploration stage. We spend money. We have investors who take big risks to give us money,” said Hughes.

“We, in turn, go on and do mineral exploration and look for signs of mineralisation. We then progressively advance to projects, or if we don’t find things that are economic, then we stop the exploration.”

The C3 Minerals vice president said that reports of interest in land acquisition are untrue.

Meanwhile, Robert Stewart, managing director of Geophyxs Jamaica, said that while copper and gold traces have been discovered in the area, there has been nothing conclusive.

Stewart said, historically, there are values of gold in the soil in the area and samples taken will show a higher-than-average reading.

Gold may have weathered over time, transitioning into the soil, he said.

“It’s what they call micron gold, little microscopic particles of gold. So it is there, but it’s not like nuggets of gold. However, it means that there might be a system in the area,” Stewart said.

“It may be small. It may not be viable, but nobody to date has actually proven a system is there.”