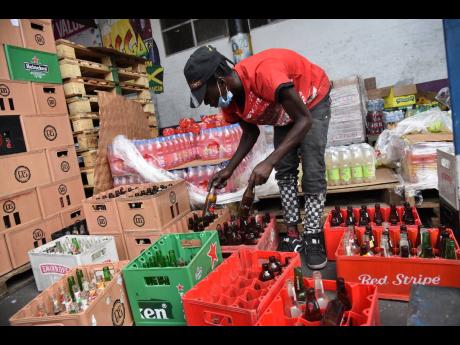 Ian Allen/Photographer
Joel Reid, a worker at Papine Wholesale and Liquor Store Limited, sorts empty bottles that will be returned to Red Stripe. Retail and wholesale customers have been mandated to return empty bottles in order to make new purchases because of a bottle supply crisis.

Distributors and whole-salers of liquor and non-alcoholic beverages are being forced to put added pressure on customers to return empties in order to purchase drinks as the global glass bottle crisis persists. Clement Stevens, director of Papine...

Distributors and whole-salers of liquor and non-alcoholic beverages are being forced to put added pressure on customers to return empties in order to purchase drinks as the global glass bottle crisis persists.

Clement Stevens, director of Papine Wholesale and Liquor Store Limited, has been left disgruntled by the Full-for-Empties policy, which Red Stripe implemented last September in response to supply chain disruptions caused by COVID-19.

Stevens told The Gleaner on Tuesday that the policy has significantly impacted business, reducing customer inflow and causing a 40 per cent decline in the sale of brewery products.

Red Stripe’s policy was also designed to help the business with its bottle-recovery efforts, but business owners contend that if the drinks are not sold as frequently and they cannot account for every beverage sold, then there would be a slow generation of empty bottles to be returned.

“How can you be responsible for a man who come in and buy a Dragon [Stout] and go a bush on him farm and drink it and lef it deh?” Stevens said.

Stevens said that he now has a balance of 4,000 bottles that he is striving to settle with the company.

In an August 3 letter to customers, Red Stripe’s head of commerce, Raymond Sean Wallace, said that for operational reasons, the company was compelled to extend the policy to customers who were not previously part of the policy as the supply challenge persists.

Only products in quantities equal to the number of bottles returned were sold to operators of community bars, quick-service restaurants, supermarket independents (hybrid), mini-marts, wholesales, grocery shops, and distributors.

Supermarket chains, supermarket independents (non-hybrid), hotels, gas and convenience stores have now been subjected to the Full-for-Empties policy since August 15.

Wallace said that customers who refused to or were unable to support the company in its bottle-recovery efforts would see a limit placed on the supply of returnable bottles and that Red Stripe would try to make products in aluminum cans available to them.

Wallace added that the policy was unavoidable as the supply chain issues and the low levels of returns were impacting manufacturing capacity and inventory levels.

Owen Massey, owner of O&C Wholesale Grocery and Liquor at Matilda’s Corner in St Andrew, is lamenting the difficult circumstances.

He pointed out that some customers who bought one bottle of ale were not required to bring in an empty glass bottle to complete the transaction, and as such, would depart the store with that bottle.

“Sometime you have a man weh really want a case but don’t have any bottle and you can’t charge them for a case of bottle, so me still lose,” he added.

Massey said that customers have been in a state of annoyance over the policy, noting that those who would not have bottles prior to wanting to make a purchase are often persons wishing to host a party or a wake and are not regular customers who are prepared to adhere to the policy.

A customer who spoke with The Gleaner said that she frequently has trouble purchasing her favourite beverage, Malta, because she does not have bottles. As a result, she is often forced to shop at supermarkets, where sometimes her preferred flavour of the D&G-produced beverage is not available.

“Say, for instance, you’re not the one that has the bottle at home, so when you go and they are telling you that you have to bring in a bottle and all a dat, that’s a problem because you don’t have it, so you can’t get your drink,” she said, noting that the process is sometimes stressful.

Sasha, a wholesale operator in downtown Kingston, told The Gleaner that her customer base has dwindled.

Describing the policy as “craziness”, Sasha recalled two weeks ago when a truck visited her establishment, and of the 500 filled bottles, she could only produce 170 empty bottles and, therefore, had to return the balance of bottles.

Other operators were also feeling the ripple effects of the bottle shortage.

On Wednesday, Wallace told The Gleaner that the scarcity remains worrying, noting that even though the pandemic’s acute effects were subsiding, it continues to affect business because of a lack of raw materials, challenges with manufacturing, and shipping delays.

He added that this did not mean that the alternative was to begin producing more quantities of aluminum can beverages, known as ‘one-way packaging options’, because it would interfere with sustainability benefits and environmental friendliness.

“We need as many bottles as possible that are already here,” Red Stripe’s head of commerce added while making a rallying cry to Jamaicans to return empty bottles to supermarkets, grocery stores, community bars, liquor stores or wholesales as quickly as possible.