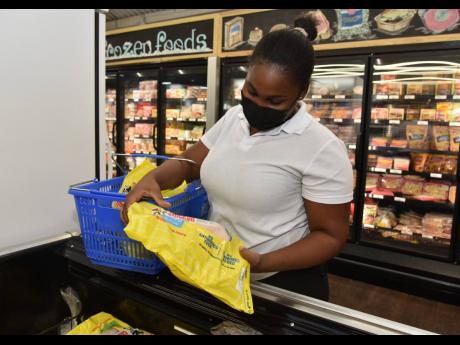 Kenyon Hemans/Photographer
Markelia Bennett examines a package of Best Dressed Chicken at S Foods supermarket in New Kingston on Wednesday. Jamaica Broilers announced that it would drop its chicken prices by $12.50 per kilogram.

Jamaicans have been urged to temper optimism that the price cut on chicken meat announced by Jamaica Broilers Wednesday signalled a definitive pullback from skyrocketing inflation. Chicken is the most popular source of affordable meat protein, and...

Jamaicans have been urged to temper optimism that the price cut on chicken meat announced by Jamaica Broilers Wednesday signalled a definitive pullback from skyrocketing inflation.

Chicken is the most popular source of affordable meat protein, and several price escalations in 2022 have caused anxiety for families with meagre incomes.

The Best Dressed brand’s price reduction of $12.50 per kilo – from Grade-A whole bird and mixed parts – is a change in fortunes for households, which had been slapped with a 10 per cent mark-up in January as global supply-chain and other factors drove up costs.

Jamaica Broilers CEO Christopher Levy is hopeful that the prices of food, especially poultry, can remain stable leading into the last quarter of the year but cautioned that the country might not be out of the woods just yet.

The near-six-month-old Russia-Ukraine war, as well as other geopolitical conflicts, continues to cast a long shadow.

“We are in, it seems, a period of relative stability, but there is so much volatility and so much risk still out there that I would keep my expectations short term because you still have the war going on in Ukraine,” Levy said in a Gleaner interview Wednesday.

The chicken meat cost adjustment coincides with a decline in inflation for July from 10.9 per cent to 10.2 per cent - evidence of a further slowing of price rises since April’s recording of 11.8 per cent.

The release of several cargo ships with grain that had been blockaded in Ukraine’s ports will only have a “symbolic effect than a real impact on supply”, said Levy, but the thawing of diplomatic relations portends a favourable signal.

“As far as Jamaica is concerned, I think that the economy is in as best a position as you could expect with all that’s going on right now. I do feel that if we can continue on this track, and have a good winter season, we could really have some positive results coming out,” he said.

Dr Samuel Braithwaite, lecturer in the Department of Economics at The University of the West Indies, Mona, agrees.

He is optimistic that Jamaica Broilers’ decision to slash prices will prod other manufacturers to follow suit.

“Some weeks ago, Richard Pandohie would have implored local firms to pass on the declines in commodity prices to consumers. This is an example of a private-sector leader being socially responsible,” Braithwaite said in a Gleaner interview.

The prices of agricultural commodities, such as wheat and corn, began returning to pre-war levels in July, influenced, said Braithwaite, by better weather in productive regions and the lowering of tensions in the Ukraine.

The economist believes that commodity prices will continue to trend downwards but warned that the positive movements are fragile.

“The situation can quickly change if the Russia-Ukraine war escalates. It should be noted that Ukraine is going on the offensive in Crimea, using guerrilla tactics.

“What is particularly encouraging is that the Bank of Jamaica has made laudable efforts at stabilising the exchange rate, so while we cannot control external events, Jamaican firms do not have to worry about a volatile exchange rate, and as such, need not increase their prices to compensate for a depreciating Jamaican dollar,” Braithwaite said.