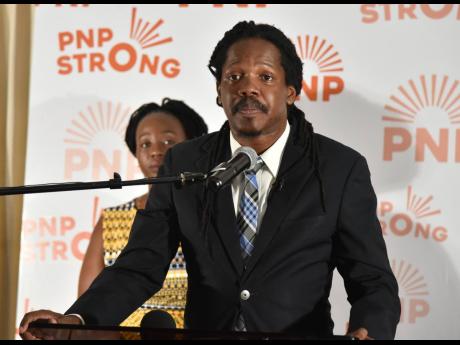 Kenyon Hemans/Photographer
Senator Damion Crawford, opposition spokesperson on education, addresses journalists during a press conference at the Office of the Leader of the Opposition in St Andrew on Wednesday. The press conference focused on back-to-school issues.

Urging the Ministry of Education to address what he claims is a serious shortage of rental books for the new academic year, Opposition Spokesman on Education Damion Crawford said the Government should spend $2 billion to replenish that stock.

Crawford told journalists at a media conference at the Office of the Leader of Opposition on Wednesday that the dialogue he has had with principals suggests that between 20 per cent and 60 per cent of students might not be able to get all the rental books this year.

Making recommendations to address the problem, Crawford said the education ministry should make arrangements with textbook publishers to access online versions of the books.

“Based on curriculum needs, allow parents using technology to purchase chapters as is necessary, thus extending the cost over a period of time than immediate,” he added.

The opposition spokesman, who also shadows the portfolios of competitiveness and training, has also placed in the spotlight the perennial problem of the shortage of school furniture and poor infrastructure.

According to Crawford, schools offering technical subjects such as woodwork and metal work were among those likely to be affected by late procurement.

Commenting on the Government’s allocation to fund student education at both the primary- and high-school levels, Crawford said the tranches of $10,500 and $17,000, respectively, were inadequate.

He said that having contacted 30 principals none estimated the reasonable cost of education below $40,000 per student annually.

Crawford called on the Government to disclose to the public the basis of their calculations to arrive at the current sums being allocated per child at the primary and secondary levels.

Discussing teacher migration, Crawford said conversations with principals suggest that the greatest shortage impacting the schools is in the areas of math, sciences, technical subjects and languages.

He said reports of an increasing number of teachers leaving the classrooms have left principals worried with further departures expected before schools reopen in September.

Crawford said that migration numbers range from between 400 and 800 teachers, adding that a recent media report indicated that the United States is in need of more than 300,000 teachers.

Describing the increased migration patterns of teachers from Jamaica as a clear and present danger, Crawford said the current education minister indicated that the number of teachers leaving the classroom was in line with global standards.

However, he is of the view that, over time, the number of teachers employed will deplete by approximately 30 per cent in 10 years and 60 per cent in 20 years.

“One should note that 40 years is not abnormal for a teacher who committed their lives to teach. The minister seems to not grasp the importance of the long-run cost curve which values the contribution of experience to performance,” said Crawford.