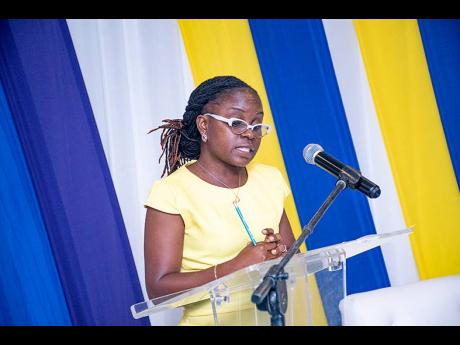 A call has been made to amend the 2011 Charter of Fundamental Rights and Freedoms to guarantee Jamaicans protections afforded by the International Covenant on Economic, Social and Cultural Rights (ESCR), which the country ratified in 1975.

The ESCR includes the right to work, social security, families, an adequate standard of living, and enjoyment of the highest attainable standard of physical and mental health and education, among other rights.

At a public forum hosted by Equality For All Foundation (EFAF) on Wednesday, Kayla Beckford Harrison, director of investigations at the Office of the Public Defender, reasoned that economic, social, and cultural rights are just as important as civil and political rights.

She said that despite the lack of recognition of ESCRs, there are provisions that may provide some measure of protection so that the initiatives undertaken by the Government are equally accessible and available.

“Discrimination often frustrates the ability of LGBT people to actualise their rights. Within the Jamaican context, this discrimination has been well-documented. Between 2011 and 2020, there were 652 human rights violation reports based on a person’s LGBT status,” she disclosed.

Beckford Harrison added that LGBT people also face employment discrimination, as noted in a 2016 study, The Developmental Cost of Homophobia: The Case of Jamaica, and the 2019 Community Needs Assessment.

“There is no broad anti-discrimination legislation which addresses the employment context. In the public sector, the staff order prohibits discrimination on the basis of sexual orientation within the civil service. For employees in the private sector, there is the option of seeking redress for unjustifiable dismissals under the Labour Relations and Industrial Disputes Act. Even then, it is not clear that sexual orientation and gender identity discrimination will fall under this rubric, and this does not address discrimination in hiring or awarding promotions,” she explained.

Beckford Harrison said that the equality and anti-discrimination provisions in the Charter of Rights are inadequate.

“Sexual orientation and gender identity discrimination by companies and private citizens is not prohibited, for example, and the laws still criminalise same-sex intimacy between adult men,” she explained.

Further, she argued that gender inequality continues to pervade the laws and legal system., noting that the sexual offences legislation, for example, is rife with gender bias as men cannot be considered victims of certain forms of sexual assault.

Among other things, Beckford Harrison recommended that the LGBT community lobby decision makers to amend existing socio-economic and cultural legislation to ensure that they reflect relevant and adequate human rights standards.

An EFAF-commissioned assessment of social support services in Jamaica found that of 44 functional agencies, only seven specifically target LGBT+ populations.

“However, the work of each agency with LGBT+ populations is narrowly HIV programme related, a condition of HIV funding arrangements, as these agencies are recipients or subrecipients of Global Fund grants or other HIV-related funding sources. Therefore, they are involved in promoting enabling environments and empowering LGBT+ service users, but none of these agencies’ core business is working with the LGBT+ community,” a section of the report read.

Further, the report said most of the services are located in Kingston and there are significant gaps in social services outside of government agencies in rural areas.