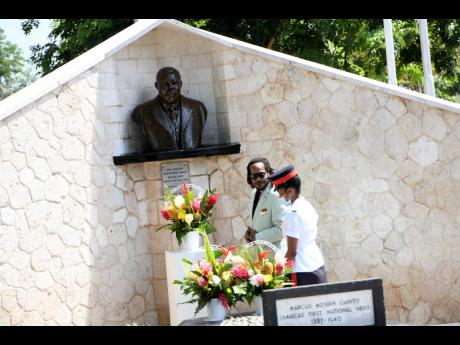 Rudolph Brown/Photographer
Steven Golding, president of the Universal Negro Improvement Association, laying a floral tribute at the shrine of National Hero Marcus Mosiah Garvey at National Heroes Park on Wednesday. August 17 was the 135th anniversary of the pan-African lobbyist’s birth. 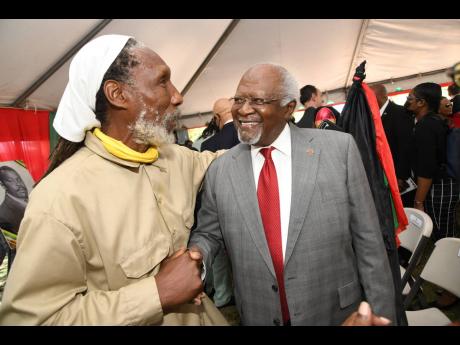 Rudolph Brown/Photographer
Dr Julius Garvey (right), the son of Marcus Garvey, is greeted by Dennis Mitchell at a ceremony celebrating the 135th anniversary of the birth of the late national hero on Wednesday, August 17.
1
2

President of the Universal Negro Improvement Association (UNIA), Steven Golding, is lobbying the Holness administration to pursue reparation by imposing a special tax on foreigners from countries with a history of trading in chattel slavery. The...

President of the Universal Negro Improvement Association (UNIA), Steven Golding, is lobbying the Holness administration to pursue reparation by imposing a special tax on foreigners from countries with a history of trading in chattel slavery.

The UNIA president said that the Government has not been forceful in its pursuit of reparation although steps are being taken to begin the process.

“If the Government was serious, one of the easiest things you could do is to put a reparations tax on every passport from a country that has a history in trading in chattel slavery and kidnapping Africans,” Golding charged Wednesday.

“But we’re afraid of that because it’s going to hurt our tourism. But listen, we’ve spent how many years building up Brand Jamaica? Either we believe in it or we don’t believe in it. I don’t think it would hurt Brand Jamaica but it would signal to the world that we are serious,” he added.

Golding made the assertions during a Gleaner interview following a floral tribute at the shrine of National Hero Marcus Garvey at National Heroes Park to mark the 135th anniversary of his birth.

Golding, whose UNIA was founded by Garvey in 1914, said that the tax should be imposed in conjunction with other CARICOM countries to minimise fallout in the tourism sector.

“So it [will] not be that people are going to stop going to Jamaica because they’re going to charge a reparation tax and go to Barbados, if Barbados is doing it, too,” said Golding.

He hinted that the CARICOM Reparation Commission will be promoting “radical” ideas.

Golding said that there are reparation commissions in all CARICOM states and that collaboration is taking place, boosting momentum.

Jamaica, which earlier this month celebrated 60 years of Independence, was ruled by Britain from 1655-1962.

The British High Commission offered no comment when contacted by The Gleaner on Wednesday, while the European Union Delegation to Jamaica said that the country “is celebrating 60 years as a sovereign state and the Government determines how and when it imposes taxes”.

Former CARICOM Chair John Briceño, who is prime minister of Belize, told The Gleaner that his government is prepared to assess the feasibility of the proposal if it is put forward by the regional bloc.

“But ultimately that would be a decision of the Cabinet. As to CARICOM, should the chair bring it up, Belize would listen and participate in that discussion,” Briceño said.

By year end 2023, the number of visitors to Jamaica is predicted to reach 4.1 million - 1.6 million cruise passengers and 2.5 million stopovers - according to Tourism Minister Edmund Bartlett. Approximately US$4.2 billion in revenue is projected.

International tourist arrivals to the region for 2021 stood at approximately 12.8 million, according to the World Tourism Organization.

President of the Jamaica Hotel and Tourist Association, Clifton Reader, could not be reach for comment.

Meanwhile, Culture Minister Olivia Grange told The Gleaner that her ministry is actively engaged with the Attorney General’s Chambers and that both are looking at avenues to pursue reparation.

“On one hand may be a petition to the Queen, and on the other hand, it may be straight legal recourse, which takes on different kinds of approaches, but the Cabinet is awaiting guidance and direction from all these discussions and engagements in order to make a final decision on the approach that we take,” she said.

But Golding argued that the Government may be too late in petitioning the Queen, with plans afoot to sever ties by 2025.

“It is sad that we did not pursue reparation seriously enough before we got to the point of jumping off the Queen’s bandwagon … . But if there is a way to bring her to book because of the fact she is our current head of state, then it should be done,” Golding said.

Dr Julius Garvey, who was also at the wreath-laying event, said that at a wrong was done to millions through chattel slavery and that there has to be restitution.

“The only way we can live together peacefully as people is if there is some compensation for the damage done. So it doesn’t matter whether we’re a republic, a part of the Commonwealth, or whatever.

“It’s the same thing, and justice is justice,” he said.