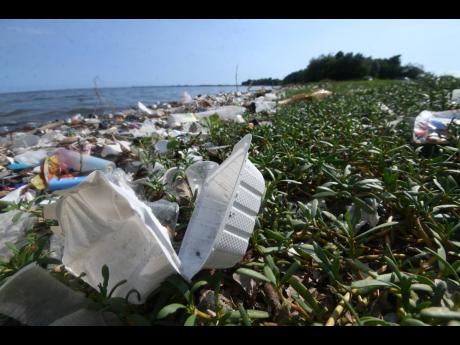 File
In this September 2020 photograph, Sirgany Beach is littered with garbage, including plastic lunch boxes which have replaced the now-banned Styrofoam models. 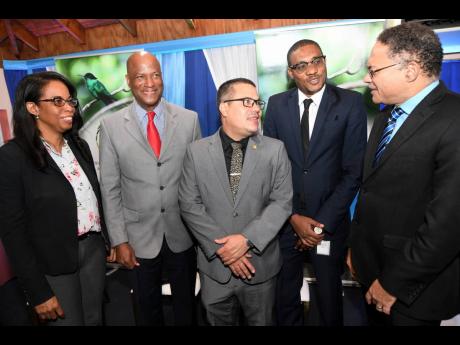 Rudolph Brown/Photographer
Senator Matthew Samuda (centre), minister without portfolio in the Ministry of Economic Growth and Job Creation, speaks with Christopher Corbin (right), acting coordinator of the United Nations Environment Programme, at a forum on plastics at the Bureau of Standards of Jamaica on Winchester Road Tuesday. Also in photo are (from left) Gillian Guthrie, acting chief technical director of the economic growth ministry; Anthony McKenzie, director of environmental management and conservation at the National Environment and Planning Agency; and Edson Carr, planning and projects manager of the National Solid Waste Management Authority.
1
2

The Government is moving to expand its ban on single-use plastic bags and polystyrene foam amid large corporations’ engagement in unethical but legal practices to sidestep restrictions while maintaining profits.

The expansion is expected to come into effect later this year, de facto Environment Minister Matthew Samuda announced, while noting that the Government has to “move the goalpost” to keep a tight rein.

He was speaking at the Ministry of Economic Growth and Job Creation’s forum on plastics at the Bureau of Standards Jamaica’s (BSJ) St Andrew office.

“Persons will look at the regulations, unfortunately, and look at ways around regulations, ways that they don’t run afoul of the law but they are able to maintain their profits,” said Samuda.

He said some have pushed the envelope by using carriers just outside of the regulation, going a little thicker or larger in their use of plastic instead of paper-based or reusable alternatives.

“We’re going to have to increase the size in terms of dimensions and thickness and types of plastic bags that are banned,” the minister said.

“So, for those listening to us and contemplating their next round of purchases, I would suggest strongly to you that you look at the recycling alternatives because you will get stuck with goods.”

The Government imposed a ban on the import, manufacture, distribution, and use of all single-use plastic carrier bags with dimensions at and below 24 inches by 24 inches, which included those commonly referred to locally as scandal bags.

A ban was also instituted on the importation and manufacturing of plastic drinking straws as well as expanded polystyrene foam, commonly referred to as Styrofoam.

However, Samuda said that businesses have now moved from using Styrofoam to PET plastic, which is lightweight.

“It is the intention of the Government to remove these plastic lunch containers from the waste stream by also expanding the band to include them,” he said.

The environment minister said that the Government will not be reimbursing businesses for excess supplies because its signal is very clear.

He said the ministry will write to the Jamaica Manufacturers and Exporters Association and the Private Sector Organisation of Jamaica, the Jamaica Chamber of Commerce, and the Ministry of Industry, Investment and Commerce, among others.

A date is to be set to avoid market displacement.

Microplastics will also be banned.

By the end of this financial year, Samuda said that the country will have a legislated depository refund scheme.

Under the scheme, a deposit fee will be charged at the point of purchase and refunded to the purchaser when the bottle is returned via a specifically designed system.

He said that the challenge facing the country is significant and cannot be left up to volunteers, with plastics accounting for 13 per cent of the country’s waste.

Samuda said that this will require collaboration among several state entities, including the Jamaica Customs Agency, the BSJ, National Environment and Planning Agency, the National Solid Waste Management Authority, and the Ministry of Industry for a seamless implementation.

He said that a wholesale ban on plastic bottles is not feasible because of the global shortage of glass, its alternative.