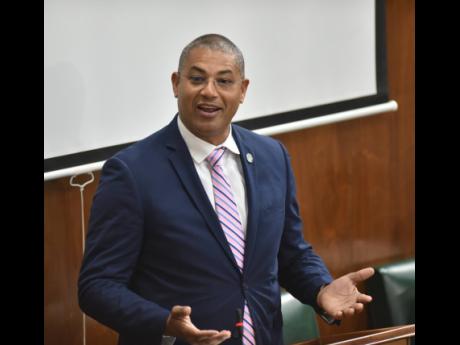 Manchester North Western Member of Parliament (MP) Mikael Phillips has described as “a travesty” the allocation of $20 million for the Constituency Development Fund (CDF), a sum similar to the amount he received when he was first elected in 2012.

In his contribution to the State of the Constituency Debate in Gordon House Tuesday afternoon, Phillips said that a decade later, the needs have increased and inflation had risen sharply by approximately 30-40 per cent.

“The only tool we have to respond to the plight and needs of our constituents has not changed for the last 10 years,” he declared.

The lawmaker also raised concerns about the distribution of equal resources to urban and rural constituencies.

“Yes, the needs are different, but agencies respond differently to urban centres than they do to rural or deep rural communities.”

Phillips said that MPs sometimes received $1 million in drain-cleaning allocations twice per year. However, he said the sum could not scratch the surface of the volume of work needed to be executed in rural constituencies.

He said that bush clearing was one of the most urgent demands made by constituents, especially after recent weeks of rain.

“I will say it again and again until someone listens. Rural constituencies cannot be treated in the same way that urban constituencies are treated with debushing and drain cleaning. East Central St Andrew cannot be compared to North West Manchester,” he stressed, referring the constituency held by his father, Dr Peter Phillips.

The younger Phillips said that the CDF and other allocations should be made based on the size of the constituency and the amount of work to be done.