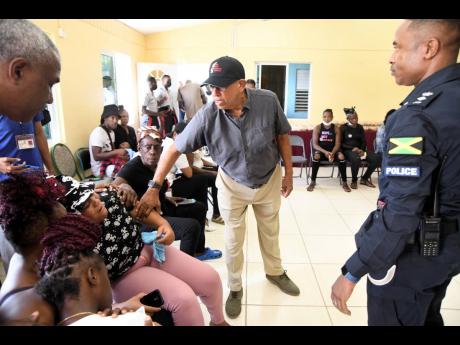 Days after the killing of three people in a mass shooting at a football match, Commissioner of Police Major General Antony Anderson announced a beef-up in manpower and other resources to tackle crime in the St Catherine South Division.

A contingent of 40 additional cops will be deployed.

National Security Minister Dr Horace Chang described the incident as tragic and traumatic and expressed sympathy for the families of the victims.

“It is normal Jamaican practice for families after church, after Sunday dinner, to take the family to go out and watch a game of football or other types of recreation. In no way would they anticipate this kind of violence,” Chang said of the gun attack at the company-staged event in Spring Village, Old Harbour.

“We are seeing across the island some very serious brutal and violent attacks on individuals involving women and children and individuals who are not even aware of what is happening getting hurt.”

The remarks by Chang and Anderson were made during a visit to the community Wednesday, where they and officials of Jamaica Broilers sought to comfort grieving friends and relatives.

Jamaica Broilers Chairman Robert Levy struggled to control his emotions as he offered prayers for the families’ victims, some of whom are or were employees of the poultry producer.

As the crying grew louder, Levy could not hold back his tears.

He told The Gleaner that the company would assess the areas of need of the families.

Anderson said that the police already have strong leads and anticipate a breakthrough soon.

“Something like this doesn’t happen and no one knows who the perpetrators are. People know, and fortunately for us, we are getting information from all over,” the commissioner said.

It is believed that the target was Jerome Squire, who was allegedly linked to illegal guns that went missing.

Squire, his niece Sasha-Gaye Ebanks, and another man identified only as ‘Curry’ were killed.

One of the gunmen was wounded by a policeman on the scene.