JTA president calls for dialogue to iron out uniform grievances 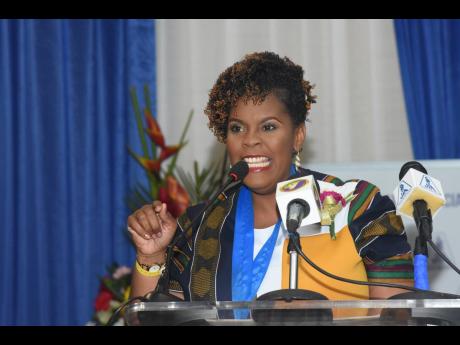 Addressing Wednesday’s online meeting of the Rotary Club of Downtown Kingston, Harrison said that the teachers are hoping that at least one of those challenges will be significantly remedied next month.

“With the shortages of textbooks, I am told that the Ministry of Education has a roll-out date of October 5, so we continue to wait and see,” Harrison said. “Some schools have not received any books at all, and those who have even received any have received inadequate numbers to date, so we are waiting to see the full roll-out until October 5 and then we can give an update concerning same.”

Added Harrison: “A lot of the furniture is not wholesome for our students and teachers to use.”

She told Rotarians that schools were also redeploying their human resources as best as they could to plug vacancies until they find teachers to fill existing vacancies.

“Some schools are still interviewing, but we are in the opening month, and so we are doing the best that we can to settle down and to settle in,” the JTA president said.

Harrison also used the opportunity to call for mature dialogue to thrash out concerns over school rules and regulations.

She was speaking in the wake of a heated protest outside the Godfrey Stewart High School in Westmoreland last week when several students were barred from entering the compound after reportedly breaching the dress code. Protesters were particularly upset because the uniforms, including skirts that were said to be too short and pants deemed too tight, were supplied by the school.

“Part of the challenge we are having as a nation is that we have reached a place where so many in the society believe that they ought not to be following the established rules or using the existing channels, where applicable, to change said rules should there be a disagreement among the stakeholders of a particular locale,” said Harrison.

She urged parents and students who believed particular rules were archaic to use established channels to press for them to be changed.