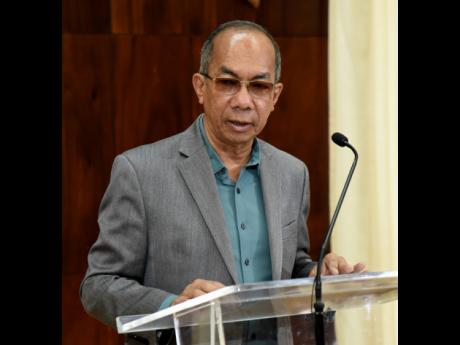 Minister of National Security Dr Horace Chang has accused The Gleaner of “misleading editorialising” of his controversial remarks on police use-of-force when confronted by gunmen.

In a press statement issued Thursday, Chang claimed that the headline, ‘Shoot to kill, Chang tells cops’, conveyed “the erroneous idea that the minister urged police to kill with impunity”.

The Ministry of National Security argued that Chang made no such inference in his near-hourlong speech at the groundbreaking ceremony for a police station in Frome, Westmoreland, last Thursday.

The ministry’s document said: “His exact statement reads, ‘They have had fatal shootings because men with illegal weapons engage the officers in gun battles. I am not telling a policeman not to fire back, and I’ll say it here in Westmoreland ... any time a man takes up a gun after the police, I expect Commissioner to train them, when him fire, him mustn’t miss.’”

Chang, Jamaica’s deputy prime minister and acting head of government at the time of his remarks, also urged gunmen to surrender when confronted by the police.

“They are entitled to a fair trial. That is why I emphasise that we are providing the courts what they require to run an efficient system.”

What the ministry didn’t say

But the 362-word statement issued Thursday makes no reference to Chang’s comments, which form the fulcrum of his fatal shooting philosophy. Chang made it clear that alleged attackers should be shot to death.

Police personnel traditionally transport wounded alleged combatants to hospital for treatment and secure wards to prevent their escape and to protect medical and other staff.

However, Chang, a medical doctor, endorsed the withdrawal of life-saving healthcare and emergency services from wounded alleged gunmen on the grounds that those costs should not be borne by the State.

“I not telling no policeman not to fire back, and I said it here in Westmoreland. I am not sending any ambulance out there either,” the deputy prime minister said.

“Don’t want him to come give any trouble to the hospital or home. I am not in that business. ... You go to hospital, it cost us $10 million to save him life. Not into that. When criminal see police come, he must surrender.”

The Holness administration has not confirmed whether Chang’s shoot-to-kill, or leave-to-die, policy has been articulated formally as a mandate to police and healthcare officials.

Asked Thursday whether alleged combatants would no longer have access to state-sponsored healthcare, Health Minister Dr Christopher Tufton said his ministry was obligated to follow the Public Health Act.

“Our mandate is to treat everybody who turns up at our facilities,” Tufton said.

Chang’s comments contradict the police use-of-force policy, which states that “medical assistance will be obtained for any person(s) who has sustained visible injury, expressed a complaint of pain, or who has been rendered unconscious”.

The Jamaica Constabulary Force has not said whether the police should ignore Chang’s pronouncements not to extend healthcare services to wounded persons.

The national security minister’s pronouncements have been criticised as an invitation to a return to impunity of the old, pre-INDECOM days when the police were regularly accused of extrajudicial killings and police homicides were nearly 300 annually. He has rejected such claims.

But his utterance about shooting to kill, or leaving to die, has also been cast against the low levels of trust, and high perception of corruption, in the Jamaican police force.

Many cases crumble because there is insufficient evidence to ground police accounts of confrontations.

Also, only a third of Jamaicans, according to a July RJRGLEANER-Don Anderson poll, trust the police.