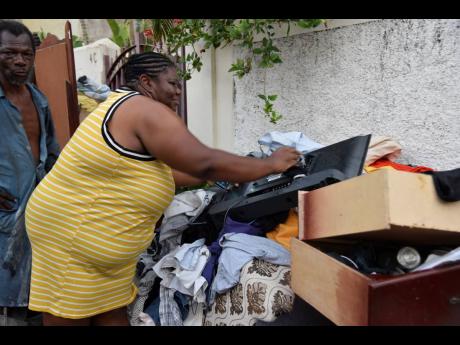 Nicholas Nunes/Photographer
Pauline Edwards stacks up items saved from her home in Standpipe, St Andrew, on Thursday after neighbours rushed to assist her before the fire destroyed her home. 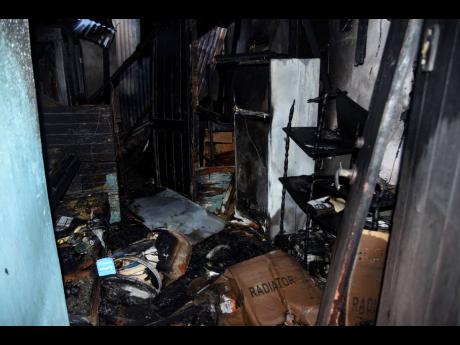 Nicholas Nunes/Photographer
Several people were left homeless after a massive blaze destroyed several dwellings in Standpipe, St Andrew, on Thursday. It is believed that the fire was started by a child, who lit a piece of paper that fell to the bed.
1
2

Despite losing most of their belongings in a fire that gutted their homes on Thursday afternoon, the occupants at a family compound in Standpipe, St Andrew, are grateful that no lives were lost.

District Officer Norris Munroe of the Jamaica Fire Brigade told The Gleaner that preliminary investigations indicate that the fire was started after a child used a lighter to set fire to a bedsheet in one of the rooms.

Firefighters from the Half-Way Tree and York Park fire stations were called to the scene at approximately 3:30 p.m., but by the time they managed to put out the blaze, it had already destroyed nine rooms.

Pollyanna Findley, who lived in a two-bedroom house on the property, said that she had heard the father loudly reprimanding the child before she realised what was happening.

By that time, she was unable to save anything.

Leeroy Samuels, who was at work when he heard that his two-bedroom house was on fire, made it home in time to save just five suits of clothing from the raging flames.

“Mi nuh save nothing. Everything inna mi house bun up. When mi come, it too late,” he lamented.

Samuels said that he had lived on the compound all his life, and although he was devastated by the tragedy, he was happy that no lives had been lost.

Meanwhile, Pauline Edwards is filled with gratitude after community members helped her to save most of her possessions.

“I was lying down on my bed and some a mi community members dem call mi and seh, ‘Pauline, pull di grille! Fire! Fire! Fire!’,” she recalled.

She remains optimistic that she will rebound from the setback.

“This fire going to be a big blessing for me because I trust and learn to serve God,” she told The Gleaner. “It could worse. No life nuh lost, so I have everything to give thanks and praise for.”