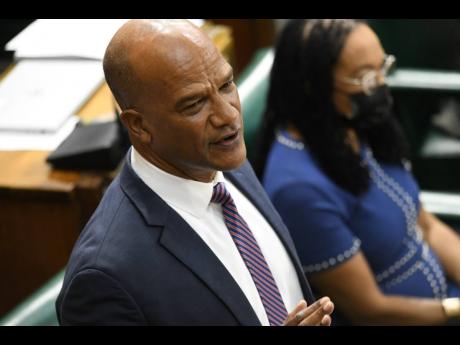 Leader of opposition business in the Senate, Peter Bunting, described as disgraceful and shameful the alleged denial by the Firearm Licensing Authority (FLA) of a personal gun permit to a policeman who has served in the Jamaica Constabulary Force for five years because of the community in which he lives.

Debating the Firearms Prohibition Restrictions Act in the Senate Thursday, Bunting said he received a copy of the letter that the FLA wrote to the cop who was denied a personal gun licence.

Noting that he would not disclose the name of the cop, Bunting said the missive from the FLA read: “Applicant’s area of residence is of concern and is likely to pose a greater risk to the applicant if a firearm is introduced.”

A seemingly upset Bunting, who is also the opposition spokesman on national security, charged that the FLA’s response was “unfair and elitist and is going to demoralise the members of the police force”.

“This is a police officer with a wrong address. This is a police officer that we are asking to face down criminals on a daily basis,” he said, adding that if the cop who was denied the personal gun permit did not receive a “keep-and-care firearm” from the State, he had to return to his home in a tough community without a weapon to defend himself.

“This, quite frankly, is a disgrace. It is shameful.”

Efforts to get a comment from FLA Chief Executive Officer Shane Dalling were unsuccessful as his phone rang without an answer.

The senior opposition lawmaker said it was unfair that young Jamaicans who have been asked to take on criminals are being denied a personal gun permit because of their address.

He argued that the community where the police officer lives placed him in a situation where he is more likely to have to defend himself than if he lived in Cherry Gardens or Jacks Hill in a gated community with 24-hour security.

Bunting said that the policeman would not even have the chance to appeal because by the time the legislation is passed and takes effect, the 21-day window would have expired. He said the cop would have to wait for two years to reapply.

The leader of opposition business told colleague senators that when he was minister of national security, the Police Federation brought to his attention that thousands of cops who had applied for private firearms were denied on the basis that they did not establish a need to be armed.

He said that after holding talks with the FLA at the time, the policy was abandoned.

However, Bunting argued that there continues to be a “sort of elitism in evaluating persons who apply for firearms”.

Tavares-Finson sought to allay Bunting’s fears, saying he was happy that any provision that would prevent the police from getting a licensed firearm was removed.

But Bunting said he was not sure that the discretion had been removed from the proposed law that is now being debated.

Acting Leader of Government Business Matthew Samuda, who piloted the legislation, said that Jamaica is facing a chronic problem of the use of illegal firearms.

He said that over the last 25 years, Jamaica has recorded an average of 1,270 murders annually, with the gun being the main weapon of choice.

With the country’s crime rate at crisis proportions, Samuda said that this now presented a clear and present threat to public safety and security.

Last year, 85 per cent of murders and 80 per cent of all robberies were done using a firearm.

Debate on the Firearms Prohibition and Restrictions Act is expected to be completed today with a few amendments to the proposed statute.