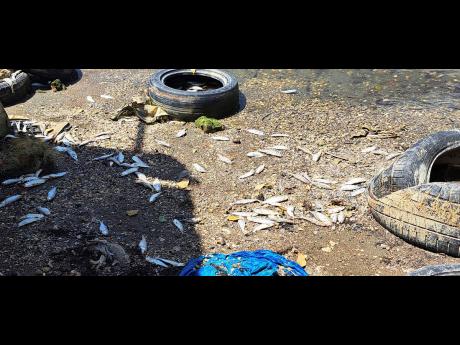 Photo by Ruddy Mathison
Some of the dead fish which washed up at Port Henderson fishing village in Portmore, St Catherine. 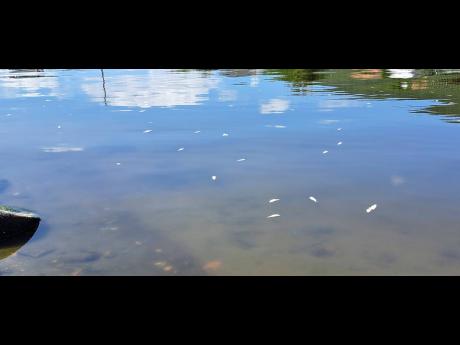 Photo by Ruddy ,Mathison
The environmental authorities are probing the cause of the second fish kill in the area in just three months.
1
2

A second major fish kill within three months has brought a fresh wave of concern for fishermen at the Port Henderson fishing village and nearby residents as they ponder the source of the latest disaster.

Hundreds of dead fish began washing up along the banks of the canal that runs alongside the Portmore, St Catherine-based fishing beach and through the community of Edgewater on Wednesday afternoon and continued into Thursday.

The National Environment and Planning Agency (NEPA) and the National Fisheries Authority are investigating the cause of the fish kill, which has only affected a species known as anchovies, which is commonly used for bait.

Richard Nelson, senior manager of NEPA’s Environmental Management Subdivision, said the agency was awaiting the results of laboratory tests as it continues its probe.

He noted that the area of concern spanned the Dawkins Pond canal, in the vicinity of Edgewater, and extended to Forum Beach.

The latest fish kill follows a similar event in June, at which time, elevated levels of pollution were detected.

Although the fishermen at the Port Henderson fishing beach say they were not impacted by the incident as they fish miles out at sea, they expressed fear that it could scare potential customers.

Norman, who has been fishing for more than 40 years, said the publicity could impact their livelihood in a negative way.

“We do deep-sea fishing, so we are not affected by what we are seeing on the shoreline, but our customers might be thinking twice before they buy fish from this area, and this will put a damper on our business,” he told The Gleaner.

He noted that this kind of fish kill has occurred in the same vicinity several times in the past, with another major incident in 2015.

His and his colleagues’ fears were not unfounded as one Edgewater resident has already decided to stop buying fish for the time being.

“Right now, I am afraid to feed my family with fish from this area after seeing this fish kill. We don’t know what is poisoning these fish, so we will not buy any fish until we are told that it is safe to eat fish again,” the resident told The Gleaner yesterday.

Members of a family from Kingston were also out getting pictures of the dead fish to send to other relatives overseas.

“My sister in New Jersey called us up to tell us that fish are dying by the thousands in Portmore, and we should refrain from eating fish for now,” one woman told The Gleaner.

She said that her sister indicated that the same thing was happening on the New Jersey shoreline and was wondering whether there was any connection.