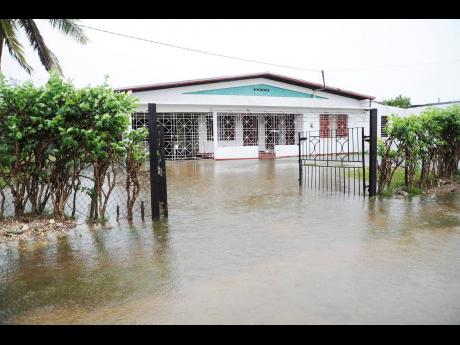 File
A home in Portland Cottage, Clarendon, is inundated by floodwaters as Hurricane Sandy approached in 2012.

Residents in at least two flood-prone areas in southeastern Clarendon believe they are prepared to withstand the snares of a tropical storm predicted to pass south of Jamaica by Sunday.

The Meteorological Service said on Friday that Jamaica and its territorial waters should begin to feel the impacts of the tropical depression as early as midday on Saturday with an increase in showers and gusty winds.

Portland Cottage was declared a no-build zone by the local municipality several years ago, because of its vulnerability to disasters with the area repeatedly ravaged by hurricanes and tropical storms.

Barbara Graham, of the Portland Cottage Citizens’ Association, told The Gleaner on Friday that, following the death of six residents in Hurricane Ivan in 2004, the community goes on high alert whenever a severe weather system threatens.

“From Ivan hit us and six persons died, it put us on our feet. So, when we see something like that, we have to be prepared,” said Graham, adding that emergency shelter managers are always on standby.

She said, too, that because of past traumatic experiences, some residents still harbour fears during the June-to-November hurricane season.

“When Ivan came, it was about 10 feet of water. With Hurricane Dean [in 2007], it was the same, so there’s always gonna be some fear because persons will always remember those times,” Graham told The Gleaner of the resulting floods.

She said that training sessions with the Office of Disaster Preparedness and Emergency Management have made residents more confident in their ability to weather the storm.

One challenge, however, is the hesitancy of some residents to evacuate their homes and move to safer grounds early. Amid the challenges, Graham said, the team is relentless in ensuring everyone is safe.

Portland Cottage Primary School is one of 93 emergency shelters in Clarendon.

Mayor of May Pen Winston Maragh, who is also the councillor for the flood-prone Rocky Point division in which Portland Cottage lies, said that boats are on standby to transport residents, should any emergency arise.

Stakeholders in St Elizabeth say they are also ready to withstand the effects of a tropical storm.

“We are on high alert. In terms of our preparedness, plans are in place, and our shelter managers are on standby. We are also ensuring that persons are equipped with what they need, should the shelters be activated,” Ornella Lewis, parish disaster coordinator at the St Elizabeth Municipal Corporation, told The Gleaner.

She added that the parish disaster committee would be meeting to make plans for mobilising additional resources, and that some private citizens had been reaching out to make donations.