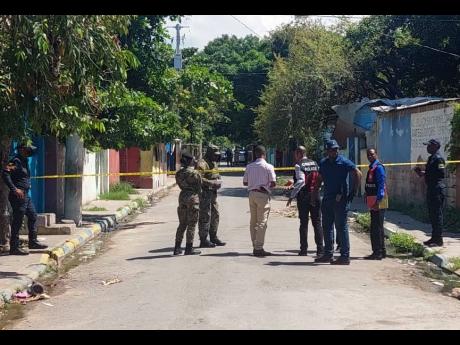 Photo by Andre Williams
Members of the security forces at the scene on Crescent Road in St Andrew, where two men were shot dead and another injured on Friday morning.

Several residents in the Crescent Road area of St Andrew were on Friday adamant that they would be heading to the United States-Mexico border after the latest explosion of violence which claimed two lives and left a third man injured. Jamaicans...

Several residents in the Crescent Road area of St Andrew were on Friday adamant that they would be heading to the United States-Mexico border after the latest explosion of violence which claimed two lives and left a third man injured.

Jamaicans like many other nationalities have sought to the United States illegally through the very expensive and equally dangerous route.

Worried that all hell is about to break loose in the community, one mother was adamant that she will have to get her son out of the space – and even the country – at all costs.

“Mi affi go look ‘bout him passport. Mi a send weh my son because a bere corruption ‘round ya. A di most blood mi ever see run out a somebody in a my life, to how dem deal with one of the yute dem,” the frightened woman told The Gleaner.

The community remained on edge up to late yesterday evening, with many residents fearful that acts of arson, which are commonplace during internal gang warfare, could create further havoc.

Reports are that shortly after 9 a.m. on Friday, gunmen shot and killed two men, who, up to news time, remained unidentified.

A third man, who was reportedly going about his business, was also struck by a bullet and hospitalised in stable condition.

The incident caused the top brass of the St Andrew South Police Division – Commander Senior Superintendent Kirk Ricketts and his deputy, Superintendent Damion Manderson, who is in charge of operations – to visit the scene along with a group of soldiers as they sought to restore a sense of normality.

But many residents said they had had enough and are ready to head up North.

“A just get mi a get my money together because ‘round here mash up. This nah stop and we nuh want get caught up in a it,” said one woman, who told The Gleaner that she has been following stories of how other Jamaicans, some of whom she knew, are allowed passage into the United States through the illegal route.

Others approached our news team, asking for connections to human smugglers.

“ Gleaner, you can’t get mi a link through the border? Mi need fi lift up ‘cause ‘round here nuh under no control. Can’t trust man nor woman,” one resident said.

A policeman who heard the request told the resident that the process was not as easy as it appeared and noted that some Jamaicans who have made the trek and have never been seen or heard from since.

During a monthly press briefing in June, the Police High Command told The Gleaner that they were aware of the North American human-smuggling trend.

Jamaican migrants generally travel to Panama as their transit port into Mexico.

The St Andrew South Police Division, which led the country with overall murders in 2020 and 2021, has recorded a 16 per cent decline in murders year-on-year.

Up to September 17, the division recorded 104 homicides – or 20 fewer than the 124 persons killed over the corresponding period in 2021.

All other major crimes in the division except robberies and break-ins have declined.

Meanwhile, murders nationally have increased year-on-year by eight per cent.

A total of 1,108 persons were killed between January 1 and September 17.