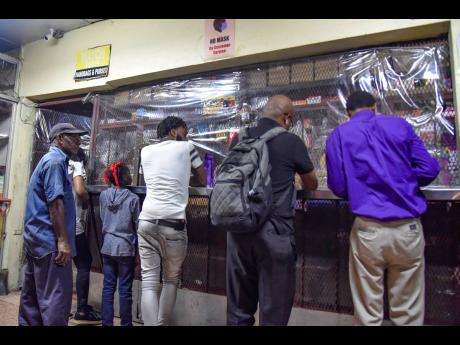 Nicholas Nunes/Photographer
People shopping for goods and emergency supplies at a wholesale in Cross Roads, St Andrew, on Friday as a tropical depression moved closer to the island. The Meteorological Service issued a tropical storm watch for Jamaica on Friday as the system is expected to strengthen today as it begins to pass south of the island.

Local Government and Rural Development Minister Desmond McKenzie is urging Jamaicans to exercise caution when using the roadways as the country remains under tropical storm watch.

“I am urging residents, not just in this community but right across the island; where there is flooding, don’t try to cross it. Those of you who drive motor vehicles, if the road is [impassible], don’t try and drive through the road,” he said at an event on Friday.

McKenzie said arrangements were in place to transport persons living in flood-prone areas to safety.

“When the transportation come, make sure you use it because we are not prepared to put the lives of our first responders at risk because people are afraid to respond to do what we are asking. Whatever you lose, once your life is spared you can work to regain it.”

He went on to say arrangements have been made to pick up persons living on the streets islandwide and to transport them to shelters as the weather system approaches.

McKenzie said that the Office of Disaster Preparedness and Emergency Management would commence operations on a 24-hour basis, starting Friday night, and that all 900 shelters and their respective managers were on alert.

Prime Minister Andrew Holness, who was also present at the event, made a special appeal to some 70 fishermen who had not yet returned to shore despite the Jamaica Coast Guard actively helping to evacuate fishers from cays and banks.

“There are some fishers who have decided that they are not going to leave the cays ... . If they have the opportunity to hear this and hear my plea, it is not too late to make a request or to make your way back to the island, back to safe shore,” he said.

Holness said that once the weather pattern intensified, responders would not be able to go back out to sea to rescue them.

He also citizens that they should stock up on food items and potable water, put aside important documents, trim overgrown trees and take other necessary precautions to be safe.

He warned against the use of candles and stated that flashlights were a better option. However, he noted that if candles were what was accessible, people should monitor them carefully.

Tropical Depression 9 continues to strengthen in the central Caribbean Sea, moving closer to the island. The system is expected to become a tropical storm today as it passes off the island’s south coast.