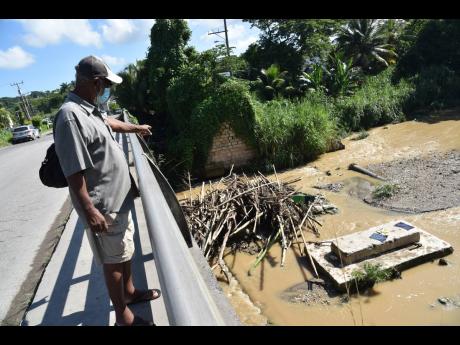 Mark Titus
Senior resident Henrick Neville says the failure of the NWA to remove the debris from the Montego River after five months could spell danger for the community of West Green in Montego Bay, St James. 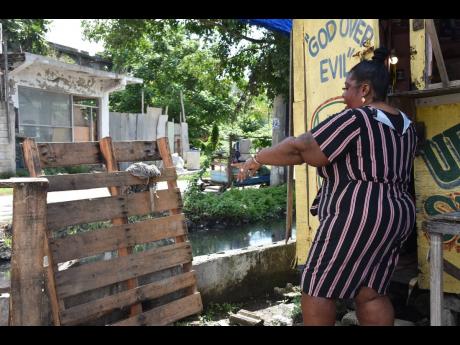 Mark Titus
Along Railway Lane, 47-year-old businesswoman Lisa Campbell uses two pallets to prevent the garbage washed out of the drains from entering her shop when it rains. 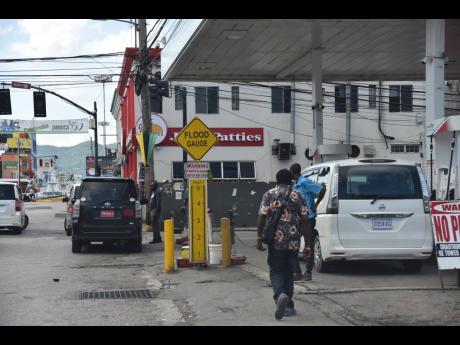 Mark Titus
Heavy rainfall periodically triggers severe flooding in sections of St James, racking up millions of dollars in damage and losses to businesses, households, farmers and motorists as well as the road network.
1
2
3

Five months after an elderly woman and her grandchild were washed into Montego River by floodwaters in Montego Bay, St James, residents of Westgreen in the town are anxious about the expected increased rainfall over the next few days. The middle-...

Five months after an elderly woman and her grandchild were washed into Montego River by floodwaters in Montego Bay, St James, residents of Westgreen in the town are anxious about the expected increased rainfall over the next few days.

The middle-class community is located near the banks of the waterway that claimed the life of 12-year-old Jennel Walters, a seventh-grader at Montego Bay High School, and her 68-year-old grandmother Beryl Walters after the family car in which they were passengers was swept away as they travelled along the flooded roadway in April.

While the child’s body was recovered, the elderly woman has still not been found despite weeks of searching.

And even though the tropical storm watch for the island was discontinued yesterday, residents are outraged that the authorities have not cleared the river of the debris and silt since April, knowing that it does not take an actual storm to create deadly mayhem in the Second City.

Tropical Storm Ian is passing south and west of the island over the weekend as it heads for the Cayman Islands, Cuba and the American state of Florida.

Despite not being in the direct path of the storm, the island is not being spared the rains.

“This is a disgrace and it threatens our community because when the rain falls and the river flows towards the sea, more rubbish is sure to come down from the hills,” Henrick Neville, who has lived in West Green most of his life, said of the inaction since the tragic April floods. “Our community is going to be affected and there is none to give account.”

In neighbouring Catherine Hall, there are also fears that flood rains could be disastrous as residents have been dumping garbage into the drains.

“The residents are their own enemies,” said one community member, who requested anonymity. “They fear the floodwaters, but they are the ones dumping their old furniture all over the scheme and now they blame politics.”

Heavy rainfall periodically triggers severe flooding in sections of St James, racking up millions of dollars in damage and losses to businesses, households, farmers and motorists as well as the road network.

The National Works Agency (NWA), which has responsibility to ensure the development of safe and reliable infrastructure, including major road and drainage networks, blamed the extraordinary flood levels on improperly disposed solid waste and an unusual volume of water from the downpour.

While the NWA rejected claims that poorly designed stormwater drains and a haphazard approach to approving development projects are to blame for the Second City’s perennial flooding woes, civil engineer Kerry Thomas, who has served as project manager for several major development initiatives in the western region, has maintained that more tragedies could unfold if existing infrastructural deficiencies across the parish are not corrected.

“We had significant flooding because of the sheer volume of rain, but if you notice after the flooding, the water receded pretty quickly because our drains were clear,” said the state entity’s communications officer for western Jamaica, Janel Ricketts. “Poor garbage-collection policies and practices do cause a challenge on the drainage network, but we have done our evaluation and our drainage system is properly maintained.”

READY FOR ANY EVENTUALITIES

She had no response when quizzed by The Sunday Gleaner on the NWA’s failure to clear the Montego River of the debris, five months after the April floods.

Ricketts, however, said that the NWA has done all it could to prepare for the 2022 Atlantic hurricane season, which ends officially on November 30.

“We are ready for any eventualities, but while you can prepare as best as possible, it is difficult to foresee how an area will be impacted,” she said. “We did quite a bit of work in terms of mitigation ahead of the hurricane season.”

This work includes clearing the North and South gullies – the hub of the city’s drainage system which has struggled to contain the volume of water coming down from the Salt Spring, Green Pond, and Cornwall Courts communities. A parishwide mitigation exercise was also undertaken between June and July along the Reading to Anchovy, Retrieve to Cambridge and Barnett to Adelphi main roads.

Along Railway Lane, 47-year-old businesswoman Lisa Campbell uses two pallets to prevent the garbage washed out of the drains from entering her shop when it rains.

Tamoy Sinclair, parish disaster coordinator for St James, told The Sunday Gleaner that all is in place to respond to the emergency needs across the parish.

During heavy rainfall, floodwaters rise as high as five feet in some sections of William, Princess, Union, Creek, and Upper Orange streets in Montego Bay, often preventing free movement of the commuting public.

“As far as the town of Montego Bay is concerned, we are aware of certain deficiencies in terms of flood impacts,” Sinclair said, noting that the parish’s disaster preparedness committee has established protocol and has mobilised equipment to clean up problematic areas in the town.

“So, in that regard, I am confident that the municipal corporation has done all it can to ensure that Montego Bay, even if it receives flood impacts, would be addressed in a short period of time,” she said.