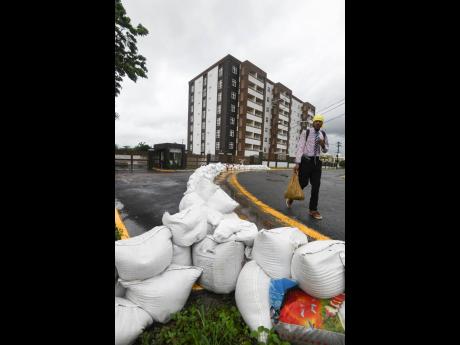 Ricardo Makyn/Chief Photo Editor
A man walks by sandbags placed at the entrance to Ruthven Towers in New Kingston to prevent flooding of the upscale apartment complex as Hurricane Ian dumped rain on Jamaica though it veered southwest of the island.

The National Housing Trust (NHT) is defending its use of sandbags at the upscale Ruthven Towers apartment complex as a precautionary measure against flooding amid continual rainfall from Hurricane Ian.

Maintaining that the NHT is confident in the effectiveness of the drainage infrastructure at Ruthven Towers, Corporate and Public Affairs Manager Dwayne Berbick said the sandbags were installed “out of an abundance of caution”.

Berbick said that Ruthven Towers is not a flood risk and that there have been no reports of flooding at the development since its completion.

The spokesman said that the NHT had engaged the services of engineering consultants on the project in keeping with drainage and other design elements of the project. And before construction, approvals were obtained, including from the National Works Agency (NWA), Berbick said.

The NWA is the agency responsible for the approval, construction, and maintenance of Jamaica’s drainage infrastructure.

Ruthven Towers steep price tag ranging from $27.7 million to $37.7 million has sparked controversy, with critics arguing that the development was contrary to the NHT’s core mandate of providing affordable homes and mortgages.

However, the Government has insisted that it was committed to providing homes for contributors spanning a wide income band.

Berbick said the agency is facilitating a smooth transition for new homeowners, including addressing promptly leakage in at least one of the 86 units.

“A hot water pipe coupling in an apartment ruptured, resulting in water intrusion into other apartments below,” Berbick said of a September 20 incident.

“The issues were addressed and measures put in place to accelerate responses to events such as these in the future.”