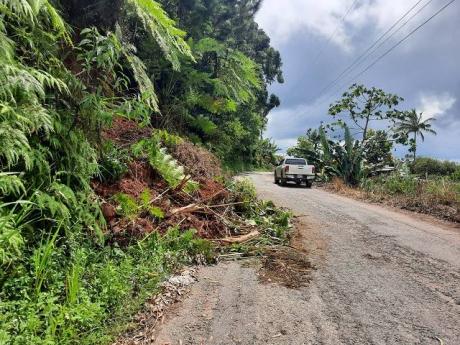 Contributed
The Wire Fence to Warsop main road in Trelawny, affected by land slippage as a result of ongoing rains yesterday. 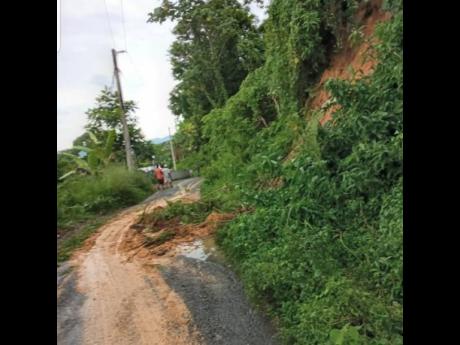 Contributed
The Torrington to Pennycooke main road in Westmoreland, affected by land slippage as a result of ongoing rains yesterday.
1
2

THE NATIONAL Works Agency (NWA) is monitoring the impact of heavy rainfall on drainage systems and roadways in western Jamaica, where some landslides have been reported as the island continues to be impacted by the outer bands of Hurricane Ian.

Janel Ricketts, the NWA’s western community relations officer, told The Gleaner on Monday that mitigation work had begun over the weekend as the agency braced for the rains.

“What we started on the weekend was before the rain, where we had some critical drains we had targeted for cleaning, so some of the work that is taking place now is work that started from Saturday and, in some instances, from Friday. We were doing work by the Blue Diamond gully and the Princess Street silt trap in Montego Bay, St James, and we were looking at drains along the Whitehouse area in Westmoreland,” she explained.

Ricketts said that up to Monday afternoon, landslides had been reported along roadways in Trelawny, Hanover, and Westmoreland.

“We have in Trelawny landslip along the Wire Fence to Warsop route. In Westmoreland, we also have some landslips along the routes from Hopeton to Auchindown, Torrington to Pennycooke, and Ferris to Maxfield,” she told The Gleaner.

“In Hanover, the Cash Hill to Dundee roadway is affected by landslips and is now reduced to single-lane traffic. There is also a landslip on the Cascade to Jericho roadway, in the Cold Spring area, and there is currently cleaning activity ongoing by the Orchard community,” Ricketts added. “None of them are really impeding traffic; some are single-lane traffic, and some are affected on the soft shoulder of the road.”

Despite rains lashing St James, which has a history of flooding during significant downpours, there were no specific reports of damage up to yesterday afternoon.

“It is an ongoing situation that we are monitoring, and it is still raining, so we have to be watching,” Ricketts said.

Several schools across the country suspended face-to-face classes on Monday in light of the weather conditions as Hurricane Ian continued its trek towards Cuba.