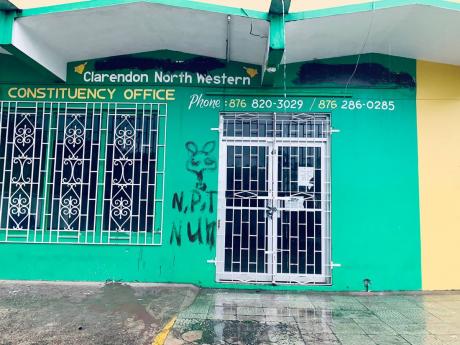 Contributed
The defaced wall of the constituency office of Clarendon North Western Member of Parliament Phillip Henriques on Monday. 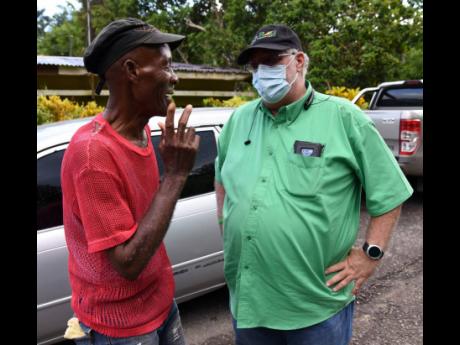 File
Phillip Henriques (right), then Jamaica Labour Party (JLP) caretaker candidate for Clarendon North Western, interacts with an unidentified constituent at a grave-digging in Effort district, Clarendon, on August 13, 2020. Henriques, who was elected member of parliament less than a month later, has defended his stewardship despite claims of ineffective representation.
1
2

Constituents in Clarendon North Western allegedly defaced the office of Member of Parliament Phillip Henriques, reportedly evidence of growing dissatisfaction with the performance of the first-term lawmaker. The Jamaica Labour Party (JLP) newcomer...

Constituents in Clarendon North Western allegedly defaced the office of Member of Parliament Phillip Henriques, reportedly evidence of growing dissatisfaction with the performance of the first-term lawmaker.

Alongside graffiti, Henriques’ name and that of councillor for the Frankfield division, Clive Mundle, were covered with black paint.

But the MP has condemned the actions as “mischief and politics at play”.

One Frankfield resident, who gave his name as Robert, has chided Henriques for not undertaking flood mitigation works before Hurricane Ian drenched the town on Sunday and Monday.

“Right now, the whole o’ the drainage system block up. The water deh everywhere on di road now from Nine Turn to Frankfield. The last time dem clean the drains about two years now, an’ dem full up back,” said Robert.

In August last year, the effects of tropical storms Ida and Grace ravaged the hilly terrain, leaving boulders, fallen trees, and silt along roadways in the constituency, which is prone to landslides, breakaways, and other infrastructural damage during heavy rainfall.

“From he has been in the position of MP, we haven’t seen where he has done anything for the community or the constituency. Right now, I don’t see where he is important,” said Brown.

The disgruntled resident told The Gleaner that residents are upset that Henriques’ promises to address deplorable road conditions and water woes have fallen through.

“People in the community are very upset. I don’t think he should be there until a next general election. Him nuh try fi help out no little situation, not even even likkle sand him can’t throw pon di road,” said Brown, adding that roads from Frankfield to Chapelton, and in Nine Turns, Coffee Piece, and Spalding were in extremely poor conditions.

Henriques, however, has denied the allegations, stating that he has repaired several roads during his two-year tenure and issued $14 million in education grants.

“There is a long list of things that have been done in the constituency since being elected. [I] repaired Andrew Hill Road that was impassable and blocked for the last six years, repaired Morant Road, Bryant Piece Road, Coffee Piece road through Copperwood, and a part of Leicesterfield Road, approximately half the Trout Hall Road to Frankfield Road, and the other half has been bid on and should be repaired in the next few months. Repairs to the Baillieston-Alston Road [are] to begin in a week or two,” said Henriques.

He said that the breakaway in Gloucester had also been rebuilt.

Henriques said that his laundry list of achievements included COVID package distribution, the construction of five Operation HOPE houses, millions of dollars in funeral assistance and welfare aid, as well as $1 million gifted to two high schools for their sports programmes.

Atop his list of achievements, he said, were the construction of new classrooms at Edwin Allen High and a new dormitory for the female track team; a collaboration with the Social Development Commission (SDC) DC and Ministry of Sports, and the constructions of two infant schools in Kilsyth and Victoria, a collaborative effort with Culture, Health, Arts, Sports and Education (CHASE) Fund.

Councillor Clive Mundle, who represents the Frankfield division, theorised that his name was painted out because of his “association” with the MP, having supported and campaigned with Henriques.

Quizzed on whether negative sentiments could affect the success of his candidacy in local government elections due by February 2023, Mundle said: “I have always tried my best to do what I can do and I have served to the very best of my ability.”