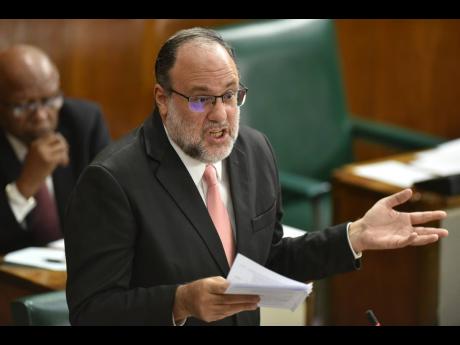 The Upper House plugged a hole in the highly touted Firearms Prohibition and Restriction Act on Friday when Opposition Senator Donna Scott-Mottley pointed out a provision in the proposed law that may have opened the door for a criminal to hand in his illegal gun and apply for a licence to become a legal carrier of the weapon.

Leader of the Opposition Mark Golding on Tuesday told his parliamentary colleagues that the amendment to the amnesty provision was very important because, as originally passed in the Lower House, it created a loophole.

Rising to debate 17 Senate amendments to the act, Golding said that someone who had possession of an illegal firearm could simply hand it in during the amnesty and “was entitled to apply for a licence for it”.

Clause 19 of the bill that was passed by the Lower House gives the minister of national security the power to declare a gun amnesty by order subject to affirmative resolution in Parliament. Persons who turn in illegal firearms during the amnesty would not be subject to prosecution.

In a Gleaner interview, Scott-Mottley said that the “absurdity” of the provision “struck me because the Government’s thrust” had been to impose mandatory life imprisonment for the possession of an illegal firearm”.

An attorney-at-law, Scott-Mottley argued that the irony of the flawed provision was that many upstanding citizens had a challenge getting a firearm licence.

“I was preparing for my presentation in the Senate on Friday, so Thursday night I was going back through the bill because I had been on the joint select committee, but I was just making sure that I had the points that I wanted to raise highlighted,” she said.

That a criminal could get a licence for a firearm because they took advantage of an amnesty was simply mind-blowing, the opposition senator said.

She said that acting leader of government business in the Senate, Matthew Samuda, spoke to the technical team and the provision was removed.

Another significant Senate amendment to the law was made to Clause 5 to correct an anomaly in a sentencing provision relating to simple possession of an illegal firearm versus possession with intent to injure.

Describing it as important, Golding said that there was an anomaly in that simple possession of an illegal firearm was being made subject to a more onerous punishment than possession with intent to injure.

As tabled, the bill referenced mandatory life imprisonment for illegal possession of a firearm. The amendment now results in a sentence of not less than 15 years and no more than 25 years.

“Mandatory life imprisonment for possession was a very extreme form of sentence at the time, and this brings it more into alignment with the rest of the scheme in the legislation,” said Golding, who welcomed the amendment by the Upper House.

“This is a very fundamental change, because as we know, one of the most common charges under the Firearms Act is illegal possession of a firearm. From the data of the cases coming into the Gun Court, a large percentage of them are simple possession – somebody finds an illegal firearm and you are charged for it. That was going to attract a mandatory life sentence and it will no longer attract that,” the opposition leader said.