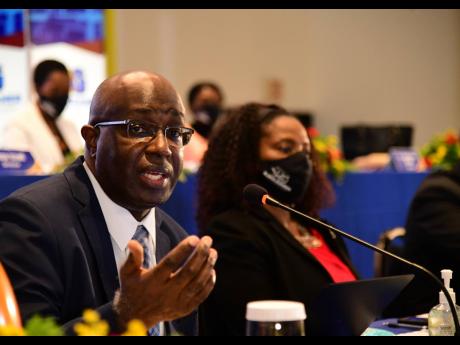 RJRGLEANER Communications Group CEO Gary Allen is calling for a review of the January 2023 deadline for full digital switchover (DSO), noting that all players in the local broadcasting landscape and members of the public will not be ready in time.

He pointed out that, with some key equipment for the transition not yet in the island, Jamaica will not meet the deadline.

“Let’s talk about a practical time frame for analogue switch-off and let’s start working towards [a timeline] that gives us some certainty about what our return period is on the investment that we are making in the tens of millions at this time,” Allen said as he reported to shareholders at the company’s annual general meeting on Wednesday.

Allen called for fiscal incentives for broadcasters, saying that, with the amount of money that has to be invested to execute a government mandate, there has to be some relief.

“Waive spectrum, licensing and regulatory charges that are listed for broadcasters until after analogue switch-off and the early stages of this process has taken place,” Allen suggested as he also called for the removal of GCT on television sets, set-top boxes, antennae and other equipment needed to drive the process.

Allen reported that the RJRGLEANER Communications Group had already spent about US$4 million in preparation for DSO, and is preparing to inject another US$6 million, for a total of more than J$1.25 billion.

“We will soon not be able to get spare parts to fix any of our transmitters unless we move,” he said, justifying the spend. “There are also TV sets that are analogue that they will not be making parts to fix those anymore.”

The CEO said that some viewers will have to purchase new television sets or retrofit existing TVs with set-top boxes to convert the new signal to allow them to use the service, which will offer a picture quality that is multiples better than analogue broadcast.

Viewers will also be treated to other new technology and the new television service will be accessible on mobile devices and even some cars.

“People who are stuck in traffic will be able to watch TV, and that audience can now be counted towards the total audience being delivered,” Allen told shareholders.

It will also open new opportunities for the RJRGLEANER Communications Group, the CEO said, as, with digital TV, it will be competing with cable companies since it will be possible to offer all its channels – TVJ, RETV, JNN and TVJSN – free along with other cable channels for a small fee.

There will also be increased value for advertisers and the opportunity for more targeted campaigns. This, he said, would be a plus, especially for small advertisers who will be able to book cheaper ads to be shown in specific geographical regions rather than nationally.

Jamaica began its phased DSO roll-out in January. The RJRGLEANER Communications Group launched the first site in the Caribbean, joining the United States and South Korea as the first three countries to adopt the new broadcast standard.