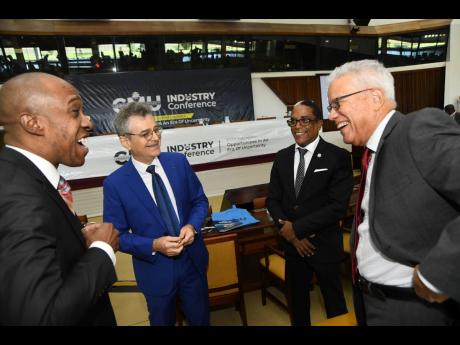 Rudolph Brown/Photographer
Professor Andrew Spencer (left), president of the Caribbean Maritime University (CMU), in an animated discussion with (from second left) Olivier Guyonvarch, French ambassador to Jamaica; Dr Norman Dunn, state minister of investment and commerce, and retired Rear Admiral Peter Brady, chair of the Human Resource Committee of the CMU Council, during an academic conference at the Jamaica Conference Centre in downtown Kingston on Thursday.

The Caribbean Maritime University (CMU) is seeking to bolster Jamaica’s counter-terrorism and investigative capacity by administering a suite of bachelor’s degrees in police sciences, forensic sciences, and cybersecurity and digital forensics....

The Caribbean Maritime University (CMU) is seeking to bolster Jamaica’s counter-terrorism and investigative capacity by administering a suite of bachelor’s degrees in police sciences, forensic sciences, and cybersecurity and digital forensics.

Newly installed CMU President Professor Andrew Spencer said the thrust is geared at making the university’s offerings relevant to the needs of society.

“There’s a feeling that we just go on the street and we become policemen, but there’s a whole science to how you properly police a nation, and we have brought that to space,” Spencer said in a Gleaner interview on the sidelines of an Industry Conference Thursday.

CMU’s Centre for Security Counter-Terrorism and Non-Proliferation was established in 2018 but the COVID-19 pandemic, which pushed classes online, delayed the launch of some of its programmes.

At CMU, the security degree students will be exposed to research and education in security, counter-terrorism and the non-proliferation of weapons of mass destruction, and small and light weapons, as well as the provision of high-level consultancy services.

“We recognise that cyber insecurity is a big problem. The truth is that almost all of us have been, whether we know it or not, bullied in virtual space, and that’s just a very basic example of what cybersecurity entails. But there are more serious crimes in cyberspace that we think we have to train people for,” Spencer said.

He said the centre is “earning its keep”, as the department operates at a surplus every year.

Upon graduation, students will matriculate into the JCF, which is eager to suppress a four per cent increase in serious crimes and eight per cent jump in murders up to September 24.

“The JCF has recognised that it’s an important programme and they have already committed to hiring every single graduate from our first cohort. Every single one of them will have a job. So that tells you that there’s a demand from what we’re offering,” he said.

Spencer said that the undertaking is similar to partnerships formed with the Port Management Association of the Caribbean as well as the American Caribbean Maritime Foundation, which he said allows students to “get jobs quickly”.

The CMU president acknowledged that the COVID-19 pandemic has had a negative impact on industries, rendering a number of graduates unable to find jobs.

“Once we clear up that backlog, we should get back to the business of being that university where, when you come to us, we’re giving you a solid education, we’re positioning you for lucrative jobs, and we’re also giving you a pathway to those jobs because of the connections that we have,” he said.

While not disclosing hard data, Spencer said that CMU experienced a fall-off in its enrolment during the coronavirus pandemic but he is expecting resurgent interest for the 2023-2024 academic year.

“We’re starting to see a pick-up already, and we’re going back to face-to-face teaching this semester. Next academic year will be the year that we get back to pre-COVID numbers,” he declared.