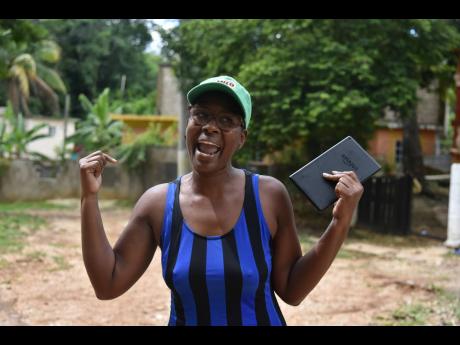 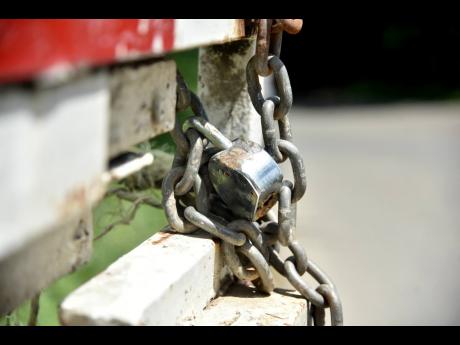 Kenyon Hemans/Photographer
The damaged lock at the Dam Head floodgate. 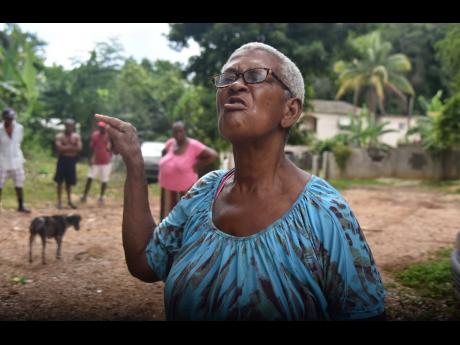 The transport operator who breached the lock on one of three safety floodgates in the Bog Walk Gorge, St Catherine, on Monday during storm rains has expressed regret for his action, claiming that he felt compelled to reach home to attend to his...

The transport operator who breached the lock on one of three safety floodgates in the Bog Walk Gorge, St Catherine, on Monday during storm rains has expressed regret for his action, claiming that he felt compelled to reach home to attend to his four-month-old and four-year-old children who have been ill all week.

The episode has spurred calls from residents for the gates to be moved closer to Flat Bridge or that they be granted access to go home. It has also opened the door for consultation with state actors.

On Thursday, residents related a litany of woes about the inconvenience of accessing their homes – including a tale of a desperately ill man dying before an ambulance, blocked at the gate, could reach him.

“By the time we lift him over the gate, it's a dead man we put inna di car,” said the Bog Walk man in question, who has requested that his name not be published.

His head occasionally hung low from the weight of public backlash and urgings from Prime Minister Andrew Holness that he be prosecuted, the transport operator recalled the events in the lead-up to the incident, which was caught on camera.

He said he and his children's mother, who were reportedly the only ones in his public-passenger minibus, were desperate to return home to relieve a babysitter who was caring for his children as the weather worsened.

“The gate was locked and me see 'bout 20 people stand up there, and normally we always have a problem,” he said.

The transport operator, who lives about half-mile from the Dam Head floodgate, said that some time in the past, he had suffered dire consequences when he chanced leaving his bus on the main road and walked home. The next day, it was stolen – the vehicle's shell reportedly found scrapped along Maxfield Avenue in Kingston.

The other two floodgates are located at Kent Village and Bog Walk proper. They are typically closed to reduce the risk of motorists being swept away by floodwaters when the Rio Cobre is in spate.

“I know I do a wrong thing by remove the lock, but I tell you, true me little youth dem 'round yah so sick out, want attention, me did really haffi try some way,” the busman said.

Seventy-year-old Elaine Gentles said that after returning from the hospital with her grandson, the gate was already closed Monday, forcing her to wrap his head in clothing to take an alternative route in the rain.

She said that residents need a hassle-free route to their homes.

“We only wah them consider we and take up fi we interest,” Gentles said.

Velma Smith, who has lived in the limbo zone since 1975, said that the gate was closed by the time her two granddaughters returned from school.

One of her granddaughters, she said, is asthmatic and had a wheezing episode from walking in the rain.

Smith said that had it not been for a single nebuliser dose – medication inhaled into the lungs – she didn't know what would have happened.

She is aggrieved about the location of an alternative paved footpath referenced by the prime minister during his address to the House of Representatives Wednesday.

“We gone back to bridle? Nothing no go so. A civilised time this. Slavery done, so you can't put we back inna bridle track,” she said.

“We are not cows, donkeys, or goats. We pass dem stage deh long time. We nuh need that. What's the sense to say that we are modernised, and at the end of the day, you carrying us back?” Louise Lewis, another resident, said.

Holness described Monday's gate breach as “reprehensible” and insisted that the perpetrators face the full force of the law.

“I know that there have been reports in the press regarding how persons in the area will access their homes when the gorge is closed, and while we understand that residents wishing to be home or to leave, there are circumstances when it would be deadly to do so,” Holness said.

Lewis continued that it has been particularly difficult for her whenever she returned from the market with goods and had to exit the taxi on the main roadway and walk up the hill to her home with produce atop her head.

Other locals have called for the prime minister to visit the area and get a first-hand look of the problem they face.

Randy Henry, a youngster in the area, said that communities like Dam Head, Five Mile, Content, and Old Road were all affected by the gate.

He also lamented remarks by the public making the bus driver out to be a villain.

“This man is like our essential worker. In the case of any emergency, this is someone we can rely on at any time of the night,” Henry said.

The Bog Walk Gorge folk have proposed that a trustworthy community member be given the key and be designated to monitor access for residents with a valid identification card to pass through to return home.

Richard Thompson, senior director of corporate communications at the Office of Disaster Preparedness and Emergency Management (ODPEM), said that the three gates were installed after consultations were had with locals and other relevant agencies.

“We have not had any problems trying to breach the gate” in previous years, he said.

Thompson told The Gleaner that no official reports had been submitted to the ODPEM or the local authorities about the residents' grouse.

He is encouraging them to make a formal complaint.

Stephen Shaw, manager of communication and customer service at the National Works Agency, said there is room for further dialogue on the matter.

“I think we are prepared, along with the ODPEM and any other entity, to have further discussions with the people there, but for now, that is where the gate is,” Shaw said.