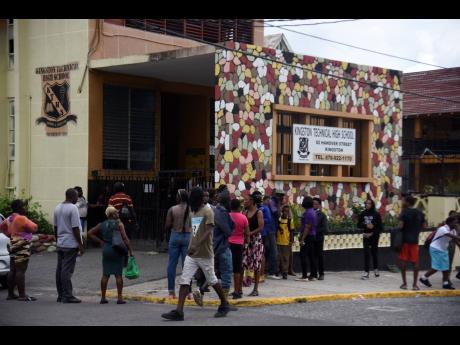 Nicholas Nunes/Photographer
Onlookers gather outside Kingston Technical High on Hanover Street after a schoolgirl was stabbed by a fellow student Thursday afternoon. The girl succumbed to her wounds.

In the aftermath of Thursday’s stabbing death of a student at Kingston Technical High School, a senior law enforcement officer is recommending that administrators collaborate with the police to conduct more unannounced searches at institutions across the country to find potentially deadly weapons and other prohibited items.

Deputy Superintendent Linval Phoenix, head of operations for the Kingston Central Police Division, made the suggestion after 16-year-old Michion Campbell succumbed to injuries after reportedly being stabbed by a 17-year-old student during a dispute at the downtown Kingston-based school.

Phoenix said that preliminary investigations indicate that the students got involved in a dispute and knives were brandished as the conflict escalated.

Campbell was stabbed in the left side of her neck and forehead, while the other student received injuries to her left wrist.

A video recording of the attack shows Campbell being collared by the student before being stabbed in the neck.

Several shocked and distraught parents and onlookers stood outside the school on Thursday, pondering how the school’s defences were breached.

However, a staff member pointed out that while the school has metal detectors, they are only used for male students while the females are searched.

Phoenix, however, pointed out that regardless of the security measures in place, there will always be a need to ramp up searches at schools, especially those that are plagued by violent clashes and disorder.

Additionally, he said, schools have to consider “the ingenious ways of the students in masking these prohibited items in getting them in the school arena”.

But to combat the problem, he said that schools should “definitely increase the number of searches that are done at the entrance and also do unannounced searches by the police coming through from time to time to see how best they can stamp out the practice of persons harming [each other in] the school environment”.

At the same time, the senior cop said that Kingston Technical High should probe deeper to find out why students feel the need to arm themselves and whether gangs are being formed at the school.

Jamaica Teachers’ Association President La Sonja Harrison, who yesterday condemned the attack, said that while the schools have employed different mechanisms to keep out weapons, it is a difficult task for administrators.

“The challenge around is presented to us as a society. We really need to stop and take stock of what is happening because schools cannot pervade the person of an individual, so even if you have the swiper and all, there are some things [that] based on where they are hidden, go undetected,” she said.

“If you going to say it’s the duty of the school to ensure that doesn’t come on, what of the duty of the parents that you would not be sending a student to school who is desirous of bringing a weapon to school?” Harrison asked.

The JTA president said the students were mirroring what is happening in the society.

“ ... We really ought to be finding better ways to deal with conflict,” she stressed.

Thursday’s bloody tragedy has left the school community in shock.

According to one teacher who witnessed the attack, a large group of students had gathered around watching as the fight occurred, and on seeing that it was becoming intense, someone pushed Campbell away. It was at that point that they noticed that she was bleeding.

“In all my 20 years, a first something like this ever happen,” another staff member said.

“You can imagine yuh send yuh pickney to school and you get news say she dead? It’s just sad and shocking.”

Principal Maulton Campbell said he was unable to comment at the time The Gleaner caught up with him at the school yesterday.