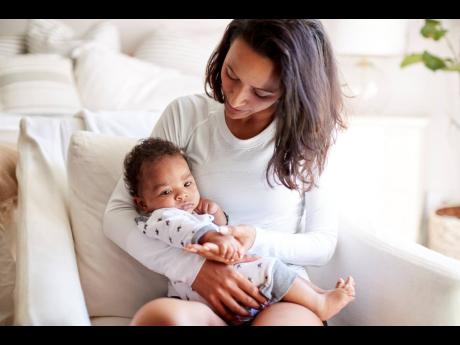 Currently, the maternity leave law – one of the seminal pieces of legislation under the late Michael Manley administration (1972-1980) – provides for three months’ leave to mothers who have given birth, two months with full pay and the third without. The bill, which became law on New Year’s Eve 1979, is now 43 years old and has never been amended.

Public sector workers currently on – or those seeking to embark on – maternity leave will have to wait a while longer for the full payment of the third month’s salary, as the announced policy did not come into effect last Friday, as promised. Up to...

Public sector workers currently on – or those seeking to embark on – maternity leave will have to wait a while longer for the full payment of the third month's salary, as the announced policy did not come into effect last Friday, as promised.

Up to press time yesterday, the unions representing public sector workers said they had not seen any documentation from the Ministry of Finance and the Public Service that the third month of maternity leave is now with full pay.

In July, portfolio minister Dr Nigel Clarke had announced that the Government intended to increase maternity leave from 40 days to three calendar months; introduce paternity leave, for the first time in the public service, for fathers of newborns, for a specific time and on specific terms; and family leave, for adoptive parents who are bringing a new child into the home, would also be part of the suite of new leave provisions.

“… To give effect to these changes, the appropriate circular will be sent out to members of the public service by September 30th ... .” Clarke had promised.

Currently, the maternity leave law – one of the seminal pieces of legislation under the late Michael Manley administration (1972-1980) – provides for three months' leave to mothers who have given birth, two months with full pay and the third without. The bill, which became law on New Year's Eve 1979, is now 43 years old and has never been amended.

Clarke signalled that there would be a change in policy, but not amendments to the law.

By policy directive, the 2004 public-sector Staff Orders would reflect a suite of changes to maternity leave and the introduction of family leave for the public sector.

On Friday, Jamaica Civil Service Association President O'Neil Grant told The Sunday Gleaner that there has been no word from the finance ministry.

“There is no directive to us,” Corporal Rohan James, chairman of the Jamaica Police Federation, said similarly.

“We have not received any update. As soon as we are in receipt of same, we are most willing to share,” said La Sonja Harrison, the Jamaica Teachers' Association president.

Replacement teachers are usually employed for educators on maternity leave.

Nursing Association of Jamaica President Patsy Edwards Henry said the body was also not in receipt of any communication notifying them of any changes from what currently exists.

The proposal, he said, would push Jamaica closer to International Labour Organization (ILO) provisions. ILO Convention No 183 provides for 14 weeks of maternity benefit to whom it applies.

“Given the importance of strengthening family life in order to address deep social problems facing the country, including the propensity for violence, we see this reform as an investment in building a stronger, cohesive society and a more productive and efficient economy that can drive sustainable and inclusive growth,” Golding told The Sunday Gleaner on Friday.

“We do not anticipate material fiscal impact from this reform, as we are talking about persons who are already employed and, therefore, on the payroll already being borne by employers.”

He said additional costs will be negligible as for some years now, there has been a sustained downward trend in the country's birth rate.

Up to Friday, neither the Government nor the Opposition could put a dollar figure to what their proposed adjustments would cost the country or employers.

A source in the finance ministry, who asked not to be named, said there was no costing on hand, and that discussions with the unions had not yet been concluded.

Gayle said it was impossible to accurately cost the proposed increase, as maternity leave was unlike other benefit for which provisions can be budgeted.

“Maternity leave is an event. You can't plan for it, and, therefore, cannot budget for it. You cannot determine what percentage of your employees who are of childbearing age will decide to have children. You cannot determine who will become fathers as well. So it's an event that will have to be prioritised whenever it comes and costs absorbed,” he told The Sunday Gleaner.

The BITU, which represents workers at Scotiabank Jamaica, said Jamaican employees at the financial institution already benefit from maternity and paternity leave, as well as leave for adoption, in keeping with the laws in Canada, where the bank is headquartered.

Gayle said that while each Canadian province provides different benefits, staff in Jamaica benefit from laws in Ontario, the province in which the multinational bank's Toronto-based headquarters is located.