Anger at breakaway fix as Craig Hill on brink of isolation 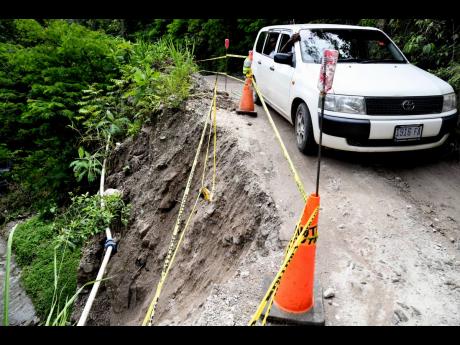 Rudolph Brown/Photographer
A car drives past the breakaway in Craig Hill, Mavis Bank, on Sunday. Residents fear that the main road to the community could be cut off. 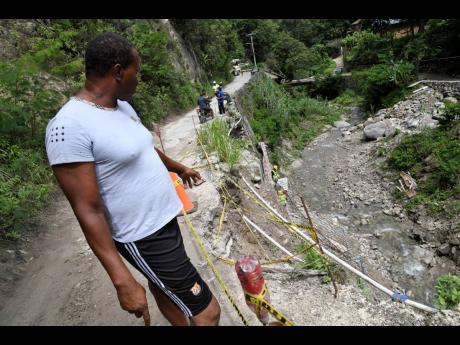 Rudolph Brown/Photographer
Michael Wint, a resident, looks down at crewmen shoring up a retaining wall at the Craig Hill breakaway on Sunday.
1
2

Residents believe the Government’s solution of rebuilding a retaining wall for the worsening breakaway in Craig Hill, Mavis Bank, is misguided.

According to numerous residents who gathered in the area on Sunday to observe the operations after a day-earlier landslide, the workmen should have been digging into the side of the hill and widening the existing path instead.

Should more showers of rain come, the residents argued, the road will further erode, even with the renovation of the retaining wall.

The road was impassable to midsize vehicles and large trucks up to Sunday afternoon.

“This is a matter of life and death! It’s just a matter of time before it breaks away again! The [retaining] wall build in the 18th century, so all a di gum gone! When mi see dem come wid dem excavator mi think dem a do the wrong thing!” Barry Nixon, a deeply concerned 59-year-old resident of Mavis Bank and a farmer, told The Gleaner on Sunday.

“A half-inch steel dem a use fi rebuild di wall! Half-inch a foolishness! A some three-quarter steel dem fi use ina dis. I don’t understand a God Almighty ting dem a do ina dis.”

Andre Smith, a car-wash operator whose business is located metres away from the breakaway added his voice to the concerns of Nixon.

“Dem a build wall on old wall. That not gonna work. A stupidness dem a do! Di road just need fi widen! Widen the road! We did think a that dem a go do, but dem a build up wall,” Smith told The Gleaner.

“Dem a cast one thing down at the bottom, and it nuh make nuh sense because di top part no good.”

Senator Norman Grant, managing director and chief executive officer of Mavis Bank Coffee Factory Limited, who gingerly drove past the precipice, said the breakaway will severely affect farmers who are unable to pass with their loads to the capital.

“This is going to affect commerce in the Mavis Bank area. We have over 15,000 people that live in communities beyond there, and the question is, will schoolchildren be affected because the buses can’t navigate it, and the issue is why did they decide to do things during the rainy season?” Grant said.

He called for an explanation from the National Works Agency (NWA), the Kingston and St Andrew Municipal Corporation, and St Andrew East Rural Member of Parliament Juliet Holness.

Calls by The Gleaner to Holness and Stephen Shaw, communication and customer services manager at the NWA, went unanswered on Sunday.

Days after Hurricane Ian veered westward of Jamaica but swamped swathes of the country with rainfall, residents are fearful that schoolchildren and workers might not be able to head to the capital if the breakaway erodes further overnight.

A preliminary estimate of the Ian-related road-clearing and repair toll has been put at $360 million, but that price tag could mount after a final review. The official late-year rainy season –October – could do even more damage.

A Mavis Bank resident, who asked not to be identified, said her husband insists on remaining in the community even though she has been pleading for them to relocate to the plains of Kingston and St Andrew. The latest brush with danger has pushed her over the edge.

“I’m moving on right now. I have to leave my family. My home and my dog. I am moving on the flat. My husband and my son can stay up here,” she told The Gleaner sombrely.

“That kind of repair job in the rainy season, it should have been done before, and it was easier to repair than to be rebuilding, and it is a rebuild that would have to be done now, which is going to cost far more money,” she said.