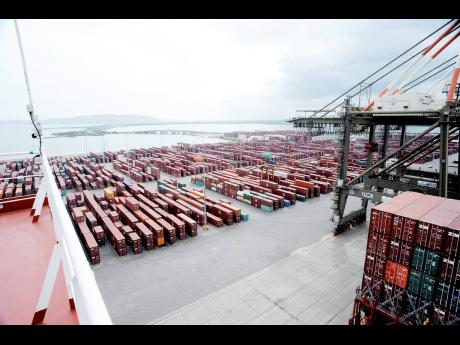 File
Containers at the Port of Kingston.

Jamaicans are set to benefit from global reductions in shipping costs which peaked at unprecedented levels in the height of the coronavirus pandemic but should brace for more shortages and further delays in the clearance of goods for the upcoming...

Jamaicans are set to benefit from global reductions in shipping costs which peaked at unprecedented levels in the height of the coronavirus pandemic but should brace for more shortages and further delays in the clearance of goods for the upcoming Christmas season.

The spin-off logistical hurdles caused the cost of moving goods across the world to surge, forcing some local manufacturers and shipping companies out of business. Some importers pulled back on procurement because of costs.

John Mahfood, president of the Jamaica Manufacturers and Exporters Association (JMEA), said shipping charges have been trending down for about three months.

“The reduction has given the country a little break in terms of bringing the cost of raw material and food items down, and the other good thing is that the Jamaican dollar has strengthened against the US dollar,” he added, noting that it would also cause inflation to fall.

But while agreeing that consumers should expect a reduction in prices, Clive Coke, president of the Customs Brokers and Freight Forwarders Association of Jamaica, cautioned that the fall-off would not be significant as shipping costs are still astronomical compared to the pre-COVID era.

Coke said that his association had requested from the Government a tax break on duties to boost imports and to help consumers but was refused.

But besides the reprieve for consumers sparked by declining freight costs, Mahfood and Coke have signalled that persisting logistical woes are likely to affect the clearance of goods.

Both pointed to a backlog of cargo ships at the island’s port, which is already causing delays and shortages.

Mahfood said the logjam has resulted in severe shortages in plastic bottles for water and sauces as well as glass bottles for beer and rum.

“So on one hand, we are seeing a reduction in cost from the shipping company and the exchange rate, but now we are suffering from shortages due to logistics,” the manufacturers’ and exporters’ boss said.

The failure by local importers to remove cargo on time and space challenges owing to empty vessels being left at the port are factors influencing the slowdown, Mahfood said.

Both Mahfood and Coke said that the problem was compounded by vessels being forced to bypass the port as they are unable to offload their goods because of a lack of space. That, Coke said, has resulted in a delay in the clearance of goods as vessels sometimes take two to three weeks to return with cargo.

Coke also said that a new Jamaica Customs Agency (JCA) policy of assuming total oversight of all cargo searches could impact the clearance of goods ahead of Christmas. The system is slated to commence today.

The contactless clearance policy will allow for warehouse operators to oversee the inspection of cargo instead of brokers.

“But I can tell you that there are going to be issues with clearance if the JCA pushes ahead with this policy,” Coke warned.

“The public can expect disruption if Customs is going to push ahead with this policy, which we think is illegal and is unfair.”

He said the new scheme could cause 300 custom brokers to lose their jobs.

In July, La Donna Manning, director of public relations and customer service at the JCA, said that initial consultations were done with stakeholders on the contactless clearance process.

“The agency will not implement any critical process or procedure or make any significant change without educating or sensitising our stakeholders or engaging in the relevant consultations. We remain transparent,” she said then.