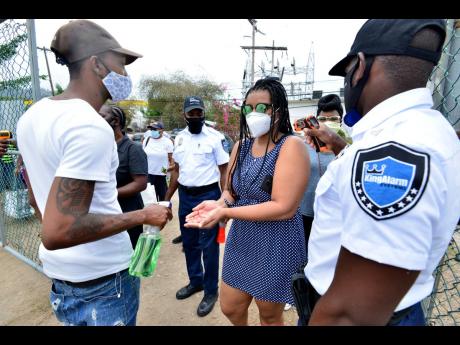 File
A KingAlarm security guard takes the temperature of a patron at a RADA farmers' market in 2020. The September 2022 Marksman ruling that security guards are not contract workers has wide-ranging implications for the security industry.

A leading trade unionist has expressed opposition to the plea for a moratorium on the payment of statutory contributions for security guards as well as the proposed amendment of the Minimum Wage Act to change the workweek from 40 to 60 hours. Those...

A leading trade unionist has expressed opposition to the plea for a moratorium on the payment of statutory contributions for security guards as well as the proposed amendment of the Minimum Wage Act to change the workweek from 40 to 60 hours.

Those recommendations were made last week in the wake of the September 23 Supreme Court ruling that guards are employees and not contract workers and that security companies should start paying over their portion of National Housing Trust (NHT) contributions.

The Jamaica Society for Industrial Security (JSIS), the lobby for security companies, has framed the ruling in apocalypic terms, saying that the now-mandated payouts posed an existential threat to many firms. It has forecast a 50 per cent hike in security charges and demanded that the Government pay over billions of dollars owed.

Vincent Morrison, president of the Union of Clerical, Administrative and Supervisory Employees, has rubbished the group-specific proposal as “nonsensical”.

“How could you have a population of workforce of maybe 1.4 million, maybe two million, and you’re going to change and put in a special dispensation for one group, which is a mere 15,000 to 20,000 workers, to facilitate a company that has been breaching the law for the longest while? To facilitate a company that has been a party to depriving Jamaican workers of certain basic social protection,” asked Morrison in a Gleaner interview Sunday.

Another trade unionist, St Patrice Ennis, believes that at the heart of the issue is whether the 60-hour span, or over-40-hour period, will be at a premium rate.

He reserved substantive comment on the viability of the recommendation.

Ennis acknowledged that some security companies operate on thin margins and that a fallout loomed because of the financial implications on services.

“That will inevitably incur additional costs for the employers ... . What we have seen in the past, when there’s an increase even in the minimum wage for security guards, that cost is largely, and in many instances, passed on to their clients, and so we would not be surprised if additional cost is passed on to clients, but that is something that they will determine,” he said of the security companies.

Morrison believes that the Government needs to intervene with a Joint Industrial Council for the security industry, involving employers, the Ministry of Labour and Social Security, and the trade unions.

Morrison said the Decent Work Agenda needs to be at the forefront of the discussions for industry standards.

Ralston Pessoa, deputy chairman and group managing director of Atlas Group Incorporated Limited, told The Gleaner that based on the ruling, security companies will find it very difficult to service their current contracts.

“The cost of security services to our customers will go up by 49.56 per cent based on costing including overtime, sick leave, vacation leave, and employer’s statutories. We also factored redundancy costs, increase in manpower, and uniform costs. The largest user of security services is Government, and they find it difficult to pay our bills now, so it will be very tough bargaining new prices with them,” Pessoa said.

A prominent director in one of Jamaica’s high-profile security firms, who asked not to be named, told The Gleaner that the ramifications from the increased cost could result in guards not being able to earn overtime, which many of them depend highly on each month for survival.

“Guards are going to be upset when they can’t work overtime ... . If customers are going to be charged time and a half for every hour worked over 40 hours, that adds up to a massive cost. If the security officers in the industry are to be treated as employees, then yes, no doubt it will have a major impact, in terms of the cost of service to the consumer,” the security honcho said.