Kevin Hendrickson toasted as a beacon in regional tourism 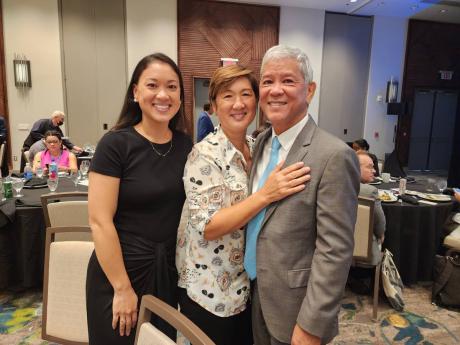 Hendrickson, the managing director of the Courtleigh Hotel Group, was recognised at a luncheon during the inaugural Caribbean Travel Marketplace Forum at the Caribe Hilton in San Juan, Puerto Rico, on Monday.

Hendrickson is often hailed as a quiet force who believes in a hands-on approach to running his organisations, including The Jamaica Pegasus, Courtleigh Hotel and Suites, and the Holiday Inn, maintaining an open-door policy, allowing team members to discuss their issues and concerns, whether company-related or personal.

“I receive this award on behalf of Jamaica – namely the team at the Courtleigh Hotel and Suites, The Jamaica Pegasus and the Holiday Inn – for their contribution in making this possible,” he said as he accepted the award, also paying tribute to his family, including wife Jackie, who he said has been with him every step of the journey.

Hendrickson expressed gratitude to the CHTA and lauded the organisation for ensuring everyone understands the importance of tourism.

He saluted Jamaica’s minister of tourism, Edmund Bartlett, and Jamaica Hotel and Tourist Association (JHTA) President Clifton Reader for fast-tracking the reopening of the country’s borders after they were closed as a result of the COVID-19 pandemic.

This latest recognition is one of many Hendrickson has received over the years, including the JHTA Hotelier of the Year and Lifetime Achievement awards.

He was also recognised with a national honour by the Jamaican Government for his outstanding contribution to the sector.

And so it came as no surprise when a video message was played from Prime Minister Andrew Holness, who spoke of the hotelier’s indelible impact on the industry.

“Kevin has been a phenomenal tourism entrepreneur and business leader, who has contributed so much to Jamaica’s tourism and to the region. This is quite a significant prestigious award to add to your already prestigious brand,” said Holness.

The prime minister’s comments were bolstered by Bartlett, who was among the attendees at the ceremony.

Bartlett described Hendrickson as the quintessential entrepreneur, a tourism leader and champion of quality experiences that the region has come to be known for.

The CHTA credited his parents, Carl and Nell Hendrickson, for instilling strong moral values and an unwavering work ethic to fuel his success.

Daughter Kate Hendrickson added her voice to the many tributes, stating that he taught her everything she knows.

“I am so proud to look back on his career and see everything that he has accomplished. This is just one more feather in his cap,” she noted, while Reader spoke of a man with a steady hand, guiding the association for many years.

“His wise counsel has helped us through the pandemic and we continue to benefit from his wide knowledge of tourism in the region. As we chart a path to sustained recovery, the JHTA and all our members congratulate Mr Hendrickson on this great achievement,” said Reader, noting that the hotelier has also contributed to national development by serving as a board member of Jamaica Vacations (JamVac) and the Jamaica Tourist Board.

He currently serves as deputy chairman of the Tourism Linkages Council and sits on the board of trustees for his alma mater, St Leo University in the United States of America.

Hendrickson began his foray in the hospitality industry in 1981 as general manager of the then Courtleigh Hotel. He also made headway into the baking industry, heading up Yummy Bakery and its subsidiaries, now Baking Enterprise.

In 1988, he continued his career in the tourism industry with a purchase and opening of the Courtleigh Hotel and Suites; in 2001, Knutsford Court Hotel; and in 2002, the Holiday Inn Resort Montego Bay. The Jamaica Pegasus hotel followed in 2011 and, most recently, the acquisition of the former Wyndham Kingston.