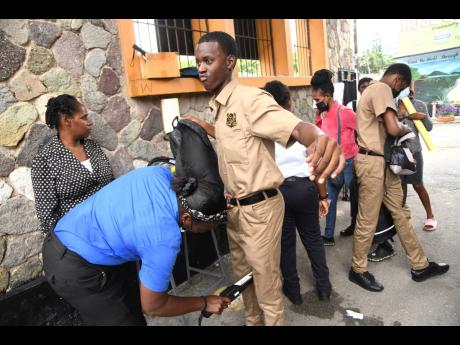 Rudolph Brown/Photographer
Kingston Technical High School students being searched before they enter the compound at the downtown Kingston-based institution on Monday.

Campbell’s alleged killer, a 17-year-old schoolmate, was charged with murder on Monday.

On a visit to the downtown Kingston-based school on Monday morning, Williams reiterated that efforts should, instead, be focused on changing the mindset of students and their parents.

“I don’t believe that we need more of this hard policing. What we really need is to reach our parents in the homes from which these children come,” she said.

To this end, Williams said that the education ministry has partnered with the justice ministry to bring restorative justice programmes into schools to help students learn how to de-escalate conflicts and resolve disagreements peacefully.

This is the second fatal stabbing incident recorded in high schools since this year. In March, 16-year-old Khamal Hall, a student of William Knibb Memorial High School in Trelawny, was stabbed to death by a schoolmate during a fight over a “guard ring”.

Williams noted that some high schools already employ school resource officers from the Jamaica Constabulary Force (JCF) and use metal detectors to search students upon entry.

She also shared that the ministry has added more than 90 more guidance counsellors to high schools across the island to help students cope with psychosocial issues they encounter in their communities.

“Many of our children have witnessed violence in their homes and in their communities, many of our children have been victims of violence and abuse and that is what we really need to treat with in Jamaica to see a break with the violence we’re seeing in our schools,” the minister contended. “That’s where my attention is in strengthening the National Parenting Commission that we have, in strengthening our Child Protection and Family Services Agency, and in ensuring that we have the legislative power to deal with some of these issues when they arise.”

Meanwhile, Jamaica Association of Principals of Secondary Schools President Linvern Wright told The Gleaner that although there may be times when hard policing is necessary in schools, it is not sustainable.

“I am not a fan of a militaristic approach to discipline in schools because what is taught in young children is to say that without that kind of hardcore approach, they shouldn’t be responding to anything,” said Wright, who is also principal of William Knibb Memorial High School.

Instead, Wright reiterated the minister’s call for more programmes in schools to teach conflict-resolution skills.

Kingston Technical High Principal Maulton Campbell, whose school is still reeling from the latest tragedy, said the inner city-based institution had, until last week, maintained peace for three years because of a campaign on student-focused character education, interventions, and sports programmes.

Dean of discipline at the Godfrey Stewart High in Westmoreland, Barbara Dandy, said her school has employed similar methods and programmes, as well as co-opted parental involvement to reduce the incidence of violence.

“Having more police presence to stem the tide of what is happening is not where I would have started. We have a strong parent-teacher association and there is much collaboration with our parents, teachers and with students,” Dandy said.