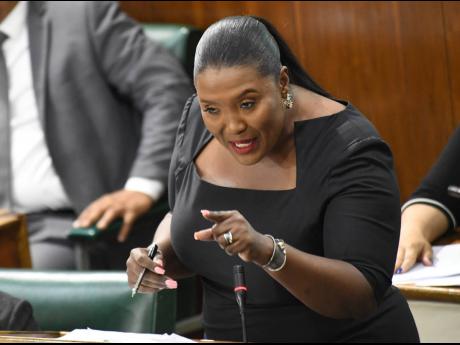 Rudolph Brown/Photographer
Kerensia Morrison, member of parliament for St Catherine North Eastern, addresses lawmakers during her State of the Constituency presentation on Tuesday.

St Catherine North Eastern Member of Parliament (MP) Kerensia Morrison has called for the National Water Commission (NWC) to revise its 1985 regulation that ties water to the property owner rather than the customer.

The lawmaker argued that the provision was hurting her constituents, many of whom she said did not own premises or may be inconvenienced if property owners die or migrate with no interest in clearing their debt.

“We cannot expect a family member, in order to get water to the property, to pay off bills of $200,000, $300,000, $500,000 or millions of dollars,” Morrison, a first-term MP, said during her State of the Constituency Debate presentation in the House of Representatives on Tuesday.

The representative said that she believed in adhering to rules but insisted that such regulations must be reasonable, fair, and just.

Morrison said that Guy's Hill and Riversdale were the communities of greatest concern in her constituency on the score of inaccessibility to water.

“If Massa God nuh fall him rain and dem set some drum, they suffer. This lack of water impairs the development of these communities,” she said, pledging to secure water for Windsor Castle.

Morrison lamented that generations of people have had to transport water on their heads and added that it was an outrage to hear residents complain of no longer being able to make several trips to the river.

The MP said it costs $30,000 per truckload to bring water to communities in St Catherine North Eastern – a price tag she argued no resident, especially low-income earners, could consistently afford.

Last week, her office spent $120,000 for four truckloads of water that she said were a drop in the bucket.

She also shared that students of Guy's Hill High School are often asked to take water to school for personal use, which she dubbed a “shame and disgrace”.

The MP commended the administrators for going beyond the call of duty to keep the school plant clean.

In the interim, she is appealing to the team that manages the water distribution to do so efficiently as residents are tired of hearing that the pump has burned up.

Morrison told her fellow parliamentarians that the Wallen's plant, which serves major communities such as Cheesefield and York Street, was operational.

The MP said she was also pleased that the Pear Tree Grove system, which is being upgraded, will be completed soon and the Lucky Valley system will be regularised.