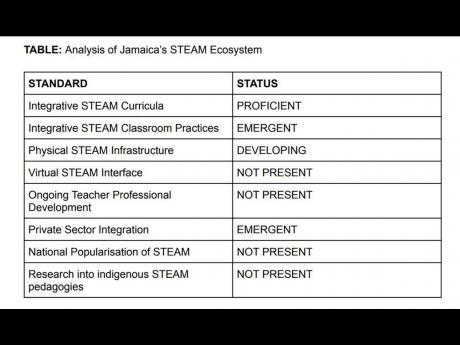 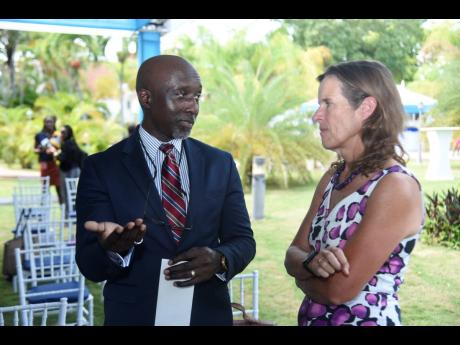 Nicholas Nunes/Photographer
Dr Albert Benjamin, dean of the Faculty of Science and Technology at The Mico University College, in discussion with British High Commissioner Judith Slater at the National STEAM education report launch in Kingston on Thursday.
1
2

STEAM is an approach to learning that uses science, technology, engineering, the arts, and mathematics.

Dr Albert Benjamin of The Mico University College says the country received a proficient grade for only one of eight categories. This category is an integrative STEAM curricula.

This means that the education sector has a curriculum that integrates STEAM methodology for all subject areas.

“This study has given us an opportunity to see where the gaps lie. We are fine with STEAM curricula as it relates to early childhood and primary, but upper secondary levels need to be assessed,” he said.

Benjamin was speaking at Thursday’s launch of the National STEAM Education Report Jamaica: Towards Developing a Strong STEAM Ecosystem at the British High Commission Kingston.

The report was commissioned by the British Council, which is the United Kingdom’s international organisation for cultural relations and educational opportunities.

Increased training, funding and collaboration are the three major recommendations made by the study.

“Teachers indicated that they thought their training in STEAM education was adequate, and yet they struggled to articulate the purpose of STEAM education. This suggests a deficit in their initial training,” a section of the 52-page report read.

One possible approach to remedying this is to actively employ the STEAM education methodology across the curriculum, and not in courses that are designed to teach about STEAM education.

The report noted that the “most striking aspect” of the gap analysis is the lack of collaboration within the STEAM ecosystem.

“There is a lot of work being done by individuals and organisations, but much of it is done in a disjointed manner,” the report said.

As it relates to funding, the report said any suggestion to increase funding in an economy that is not growing at high enough rates to support increases is likely to be met with scepticism.

“However, the cost of inaction will certainly be greater. Spending on education is one of the most cost-effective means of securing long-term growth and development of an economy.”

Meanwhile, executive director of the National Education Trust (NET), Latoya Harris Ghartey, said STEAM is the way of the future and must be interwoven into the DNA fabric of the country’s education system.

She said training, funding and collaboration are the three main areas that NET’s projects seek to tap into.

NET will be undertaking a programme which seeks to enhance and build the capacity of teachers, to assist the ministry with its education management system, and to build seven new STEAM academies.

“These schools will be purpose built for STEAM, in that they are designed to create that environment that promotes STEAM in the teaching and learning but also maximises creativity, curiosity, intellectual rigour and innovation,” she explained.

Harris Ghartey added that the buildings will be climate-resilient, green and technology-driven, with suitable lighting and ventilation.

Another major policy brief recommendation is to facilitate and secure seed funding for a national STEAM fund.

Associate dean of external engagement in the Faculty of Science and Technology at The University of the West Indies, Mona, Dr Andre Coy, reasoned that Jamaica’s research and development agenda is important in the development of a STEAM ecosystem.

Jamaica’s expenditure on research and development, as a percentage of GDP, is 0.03 per cent.

“We are not going forward with that. We are not making a STEAM ecosystem with that and it’s not down to a single organisation. It’s not down to a single partner. It is on all of us to work together to be coordinated within this STEAM ecosystem, so that we can move this vision forward. We’re running out of time,” Coy, the independent consultant on the study, remarked.