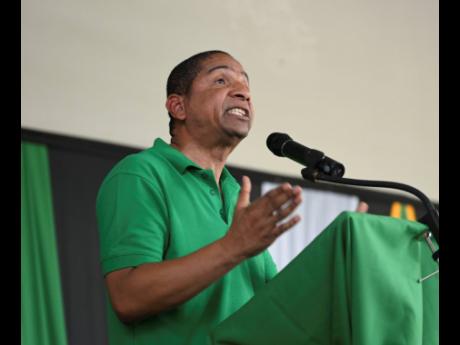 Jamaica Labour Party (JLP) councillor for the Seivwright Gardens division, Delroy Williams, openly criticised colleagues from the party’s powerful Area Council One who he accused Sunday of being derelict in their duties.

Williams, the mayor of Kingston and a government senator, told JLP delegates and supporters at the St Andrew North Eastern divisional conference that a significant number of the leadership corps in that group has consistently failed to show up at party meetings as it readies for its 79th Annual Conference next Sunday.

He said while support was strong from party faithful, the leadership fell short.

In the same breath, Williams said there is serious work to be done in Area Council One, which comprises Kingston and St Andrew.

He said the meetings are to provide direction for councillors who are to disseminate the message and philosophy to the party’s wider base.

“When our leaders speak, they provide clarity on issues so that we can go into communities and speak properly and confidently about the position of our party and the position of our Government,” Williams said at the Girl Guides Association headquarters in St Andrew.

But the presence of Area Council One leaders and delegates was determined to be lacking.

“If we don’t go to these meetings, what will happen? The prime minister would have spoken to the people who are supposed to hear. As deputy chair of Area Council One, I was not pleased with the turnout of the leadership in the Area Council.

Meanwhile, chairman of the JLP’s Annual Conference, Desmond McKenzie, has put Labourites on notice that the meeting of the party’s highest decision-making body will not be business as usual.

“It’s not going to be a conference where you come and ring bell and drink and jump up and down and show off your outfit,” McKenzie said.

“This year’s conference, we need to arm ourselves with the knowledge and information so we can challenge the people who are spreading mischief about the performance of your party and Government,” he added.

McKenzie argued that challenges, including crime, abound but noted that they are not unique to Jamaica.

He said Jamaicans should be proud of how the Holness administration has weathered the storm brought on by the COVID-19 pandemic.

He echoed similar messages from Chancery Hall division Councillor Duane Smith and Kingston Central Member of Parliament Donovan Williams that no public-sector worker lost their job during the pandemic.

“Labourites, we must never ever be afraid to talk about what the Government and Prime Minister Andrew Holness and the Jamaica Labour Party have done,” he said.

The conference is set for Independence Park.