Amid cheque-signing hurdles, Williams promises to rationalise school board transition 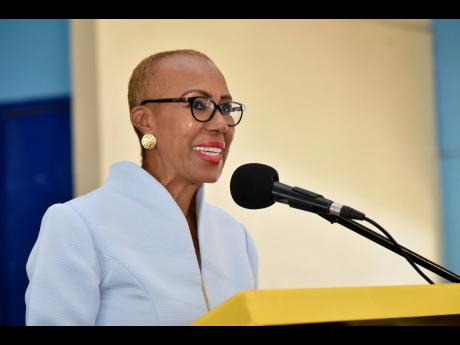 Education Minister Fayval Williams has pledged to improve the transition of new school boards to avoid bureaucratic hurdles that slow the disbursement of funds and disrupt operations.

Williams contends that what ought to be a two- to three-week transition sometimes takes too long. The upshot: The failure to install new signatories could complicate routine processes, such as the authorisation of a cheque.

The minister’s commitment comes amid reports of recent delays to the operations of Troy High School in Trelawny whose internal cheque signatory, principal Eddie Whyte, was on leave.

Williams said she will seek to rationalise the process.

“When we install the new board, there is a little space in there in order to collect the information from the new members that has to go to our finance department and then to the accountant general and so on, and it takes a little while. We’ve been trying to shorten the time frame when we make these transition to the new board,” Williams said in a Gleaner interview.

“I’ve asked for the process to be laid out to see what can be eliminated without compromising the process,” she stated.

“There are three internal signatories, two of which are no longer at the school, but with whom we would have contacted. The external signatories are two until May next year,” Wainwright told The Gleaner.

The Region Three director said that the school would have sent through the Ministry of Education to the Ministry of Finance a change of signature from as far back as May 2021. However, no response had been received, he said.

The school is now in receipt of a change-of-signatory document to include the vice-principal.

“The challenge the Ministry of Finance had was the stipulation that a school must have no more than three accounts. However, a fourth account was showing up, but this account belongs to the primary school,” Wainwright told The Gleaner.

This, he argued, had to be clarified with the Ministry of Finance before the new signatories could be approved.

The regional director said that temporary arrangements were made with the National Commercial Bank to ensure that the school’s obligations were met.

Williams confirmed that Troy High’s signatories are now in place after changes were made to the school board.

Best practice, The Gleaner understands, is for there to be four signatories: two internal and two external.

Linvern Wright, president of the Association of Principals and Vice-Principals, recommends that signing rights information be submitted to the Ministry of Finance and the Public Service the same time that school boards are appointed.

But the bungling of signatory privileges transcends the Trelawny school and is a far bigger national problem, an educator has said.

“The people who wrote from Troy wrote out of frustration,” said the educator, speaking on condition of anonymity, explaining that every three years school boards are changed - some at the end of the calendar year.

“By February 1, new people are coming in. The school boards are also designated based on the political complexion of the particular constituency. When it changes, a change is required in the signatories of the school,” the educator said.