Abuse survivor vouches for JASL in fight against female victimisation 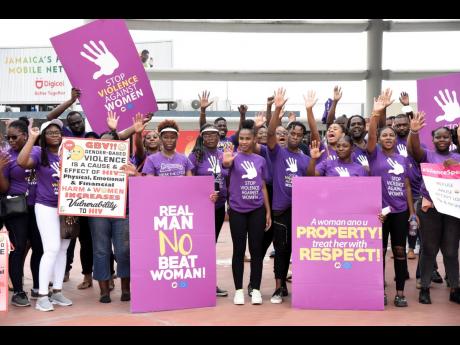 Ian Allen/Photographer
Protesters raise awareness in the fight against female victimisation during a Jamaica AIDS Support for Life-led silent protest to mark International Day for Elimination of Violence Against Women in the Half-Way Tree, St Andrew, on Friday. 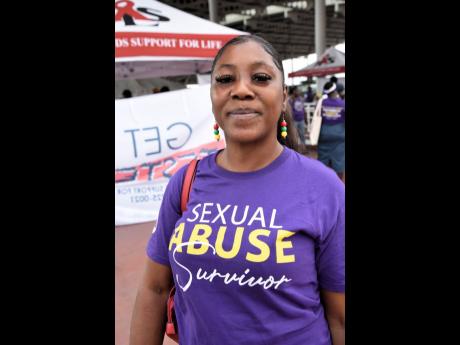 Ian Allen/Photographer
Sandra Greenland hails a decision she made to join the silent protest marking International Day for Elimination of Violence Against Women in the Half-Way Tree, St Andrew, has changed her life for the better.
1
2

Sandra Greenland was a vendor in Half Way Tree four years ago when she encountered members of the Jamaica AIDS Support for Life (JASL) having a silent protest to mark International Day for the Elimination of Violence Against Women (IDEVAW), which is celebrated on November 25 each year.

At the time, she told The Gleaner, she was in a crumpling mental state.

With a history of being abused and trying to cope with the unaddressed trauma, she had been recently separated and was a single mother of seven children. She was struggling financially, to the point of being suicidal.

Greenland said she was drawn to the message of the protesters, and after enquiring more about it, she decided to join them. This, she hails, as one of the best decisions in her life.

“I was introduced to a counselling session, which I really needed at that time, and the counselling was free. They offered me assistance for many things. They even offered to assist me to go back to school to do whatever I’m passionate about,” she told The Gleaner on Friday as JASL once again staged its IDEVAW protest in the St Andrew capital.

Greenland revealed that she is currently enrolled in a culinary course.

The dramatic change in her life’s circumstances is something that still surprises her after enduring so many hardships for so long.

She told The Gleaner that she was 13 years old when she was first sexually molested and ran away from Gordon Hill, St Catherine, and made the streets her home.

The 43-year-old said she spent most of her teenage years out of school, moving from “one abuser to the next”, as they took advantage of her naiveté.

But as she looks back on her journey, Greenland is hoping that others who are in similar situations will take advantage of the opportunity provided by JASL.

“If they help me and I’m on my way to recovering and reach this far, I know persons out there who are suffering can get even better,” she said.

It is testimonies like Greenland’s that JASL Policy and Advocacy Officer Patrick Lalor said serves as the impetus for the organisation to continue doing this protest, which was also held in Falmouth, Trelawny, and St Ann’s Bay and Ocho Rios in St Ann on Friday, under the theme ‘Unite! Activism to End Violence Against Women and Girls’.

Asserting that violence against women is a human rights violation, Lalor said many women are infected with HIV because of sexual violence.

“Women who are raped, women who are in abusive relationships where they are not able to have sex on their terms, so they may be in a relationship with someone who they know are having extramarital relationships, where they may be having unprotected sex with other people, but at the same time because of the fear of abuse, they will not say, ‘Let’s use a condom’. It leaves us with a lot of women in our care now treating HIV, who became positive as a result of violence,” he told The Gleaner.

Lalor said that 85 per cent of the estimated 30,000 HIV-positive people in Jamaica know their status, but only approximately 50 per cent are in care. He contends that some women are prevented from accessing care because of domestic violence.

However, while he says tackling violence against women is an “uphill task” in Jamaica, JASL remains undaunted, and he is urging victims to take advantage of the legal and social support the organisation provides.