Chuck: JFJ should make itself available to SOE detainees 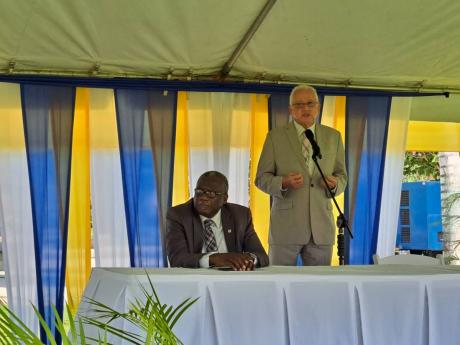 Justice Minister Delroy Chuck has challenged Jamaicans for Justice (JFJ) to exercise its mandate of upholding the rights of citizens under the states of emergency (SOEs) across the island after the human rights lobby raised concerns about the regulations.

Chuck was speaking to The Gleaner during Friday’s staging of the Legal Aid Council’s Justice Fair at the Harmony Beach Park in Montego Bay, St James, one of the parishes where SOEs are now in effect.

The fair was held as part of the Ministry of Justice’s initiative to make justice more accessible to Jamaicans, while promoting its alternative justice services for citizens to avoid the formal justice system.

“We are not saying that the SOE is the end-all of everything, but it is obvious where we have utilised it that we have been able to cauterise many of the murders and various gang warfare in communities. The truth of the matter is that the security forces have been able to identify the violence producers and have been able to detain them for extended periods of time,” said Chuck.

“The only thing I would say to JFJ, since I am aware they do not like persons being detained, I would say make yourselves available. If the SOE continues, I am sure opportunity will be afforded them to go and interview persons who have been detained to see if they are being treated in any manner that is unlawful,” Chuck added.

The SOEs, which were declared in St James, Hanover, Westmoreland, Clarendon, St Catherine, and parts of the Corporate Area last week Tuesday, are set to expire on November 29 after the Opposition failed to support the Government’s bid to have the initial 14 days extended in the Senate on Friday.

On Wednesday, the JFJ had urged senators not to support the extension after the Government used its majority to approve the resolution in the Lower House on Tuesday. The human rights lobby cited concerns about the regulations and the retention of detainees’ fingerprints and other biometric data, among other issues.

On Friday, Chuck said that the Office of the Public Defender would be one of the Ministry of Justice’s partners in ensuring that the rights of detainees under the SOE are upheld.

“We certainly have the Office of the Public Defender, who will be monitoring all of the detentions, and other human rights organisations because one of the things we will ensure is that our people must be treated lawfully and their rights and freedoms must be respected as much as possible,” said Chuck. “But where we get information from the security forces that many of them are responsible for some of the criminality in their communities, then we have to act.

“All of them not only have access to their attorneys, but they can appear before the SOE tribunal, and at the tribunal, the lawyers are able to get a very good idea why they are being detained. But we do not have the hard evidence of community persons coming forward to give written statements for us to be able to charge them, and that is the challenge of the criminal justice system, where if we could just get persons who know that they are responsible for many of the conflicts in their communities, then we could be able to lock them away for some time,” Chuck added.

Meanwhile, St James Custos Bishop Conrad Pitkin is of the view that the SOE is not the final answer to crime.

“All of us agree that the SOE is not a panacea; it is not a means to an end, and it is not the answer [to crime]. However, it is my firm belief that the SOE should be used as a short-term method, not medium-term, but short term, in order for the security forces to be able to put in place whatever measures that will be necessary,” said Pitkin.