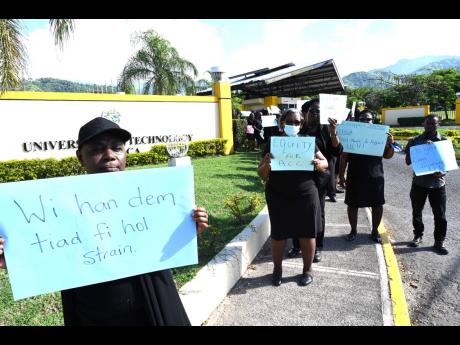 Rudolph Brown/Photographer
University of Technology Administrative Staff Association members demonstrating outside the gates of the Papine campus Monday over a salary review exercise which has been outstanding for more than five years.

Citing financial difficulties and a limited subvention from the Government, the University of Technology (UTech) told protesting administrative staff on Monday that it was unable to provide a salary increase at this time.

Donned in black and bearing placards, striking administrative staff vented frustration with what they described the lackadaisical response of the university’s management to non-deliverables in a heads of agreement, including a salary review that has dragged on for more than five years.

Monday’s protest lasted an hour before the admin staff returned to work.

Grayson said UTASA has been unable to get a definitive position from UTech’s management on how its members would benefit within the new compensation structure.

She also said the staff association has been unsuccessful in its efforts to convene a meeting with the Ministry of Finance.

But UTech President Colin Gyles said his management team has been meeting with representatives of the finance and education ministries to advocate for an increase in subvention “to support the operational costs at the university, inclusive of required funding in support of the compensation adjustments”.

UTech is not unfamiliar with protests of this nature, as academic staff went on a days-long strike in 2019 owing to the university’s failure to pay outstanding funds amounting to $886 million.

In the meantime, Grayson said that UTASA met with UTech Chancellor Lloyd Carney on Monday.

“We have a directive from him that he will be speaking with the minister of education and get back to us within a week regarding our concern,” she said. “ He is the newly minted chancellor and we are hoping and trusting that whatever happens, we should be able to stand on his word.”