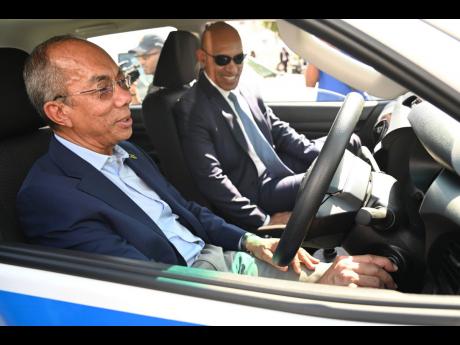 Rudolph Brown/Photographer
Major General Antony Anderson (right), commissioner of police, and Dr Horace Chang, minister of national security, tests one of the 15 new Mitsubishi L200 pickups and 10 Toyota Hilux pickups which were handed over to the Office of the Commissioner of Police in St Andrew on Tuesday.

Describing Jamaica’s dangerous criminals as rats who went into hiding during the just-expired states of emergency (SOEs), National Security Minister Dr Horace Chang has pledged that the security forces will hunt down and detain the perpetrators of...

Describing Jamaica’s dangerous criminals as rats who went into hiding during the just-expired states of emergency (SOEs), National Security Minister Dr Horace Chang has pledged that the security forces will hunt down and detain the perpetrators of crime when they re-emerge.

Chang, who is also the deputy prime minister, also warned criminals not to engage the security forces with firepower, noting that any attack on the police and army could spell their own demise.

“They went (into) hiding because they heard the SOE (was) on, and I say like the rats they are, they were hiding in the holes. As they come out, maybe they will do some harm, but we are going to find them, we are going to incarcerate them, and if they fight, we will find a way to take them out,” Chang said during Tuesday’s handover of 25 new vehicles at the Office of the Commissioner of Police on Old Hope Road, St Andrew.

The police have at least the 300 alleged crime producers on their radar.

The national security minister said that with the expiration of the two-week SOEs across seven parishes, it was not the administration’s intention to rush into declaring a fresh crackdown.

However, he indicated that if the conditions demand a new declaration, the Government would not be shy to implement the measure in quick succession.

Castigating those parliamentarians who voted to block an extension of the 14-day SOEs, Chang said that the leadership of the Opposition has taken a philosophical view on SOEs that was “wrong” and “irresponsible”.

The Opposition has insisted that SOEs are not routine crime-fighting measures, that the circumstances did not support an extension, and that two court rulings put the regulations under scrutiny.

The regulations have since been amended but have not yet been tested in the courts.

Debating an extension of the SOEs in the Senate last Friday, Peter Bunting, leader of opposition business, argued that members on his side took an oath to uphold the rights of Jamaicans and the Constitution.

But Chang took aim at the Opposition, charging that they gave the criminals a break by not voting to extend the SOEs.

“It’s like the rats went into the holes to hide but they hear now the rat trap gone, and they come out enraptured in all kind of rights given to them by some people who don’t seem to understand that our responsibility is to protect the lives of law-abiding Jamaican citizens,” said Chang.

In a Gleaner interview, Chang said that the police and army are carrying out a daily review of the landscape to determine the way forward.

“It is somewhat remarkable that after the vote on Friday, the Saturday we had six murders. Six is a large number ... . Again, we had a drive-by shooting downtown Kingston today (Tuesday). The characters involved in that are people who were just not visible for a while and, therefore, the commissioner and the CDS will have to monitor that,” Chang added.

Rear Admiral Antonette Wemyss Gorman is the CDS, or chief of defence staff.

Chang argued that there was a 70 per cent fall-off in homicides over the two-week period when the SOEs were in effect.

He said that 23 murders were committed over the two-week period, adding that the country has not seen such reduced numbers for similar periods in recent memory.

The national security minister said that eight of the 23 persons killed met their demise as a result of domestic conflicts.