After wishing to die after diagnosis, mom of four embraces hope 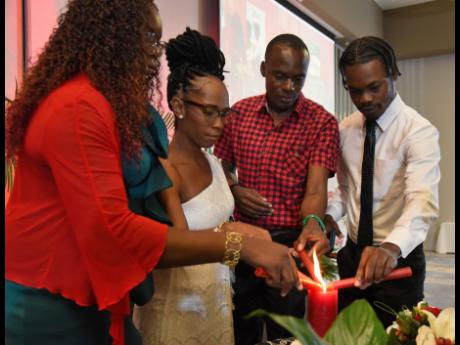 Two decades ago, a then 21-year-old mother of two was allegedly wilfully infected with HIV by someone she was dating. The Portland native told The Gleaner that she was actively pursued by the man, who she described as appearing to be quiet and...

Two decades ago, a then 21-year-old mother of two was allegedly wilfully infected with HIV by someone she was dating.

The Portland native told The Gleaner that she was actively pursued by the man, who she described as appearing to be quiet and innocent.

But, five months after their first sexual encounter, she began feeling ill, and she later learned that he had deliberately pierced the condom to infect her with the virus.

“When I gave the contact investigator the guy’s number, his remark was that somebody give it to him so him a pass it on to the whole world,” she said.

Although she has made immense progress both mentally and physically since the diagnosis, the woman said she still remembers the struggles and depression she endured in the first few years.

Stressing that she was not promiscuous, the news had left her devastated and, as there was not a lot of information about HIV at the time, she thought she was then staring death in the face.

“I sat outside the clinic where there were some cars, and I say to one a di man say, ‘Why yuh nuh run di car over mi because mi a go dead now?’,” she told The Gleaner in an interview ahead of today’s commemoration of World AIDS Day.

The woman recalled weighing only 50 pounds and being affected by thrush in her mouth and throat that made eating a difficult task, as it was hard to swallow.

In addition to her physical deterioration, she was also dealing with the intense discrimination from residents of her community.

“At that time, persons were so ignorant and dem never know nothing. ... If I was supposed to go into a car, they would whisper and be like, ‘A she dem seh have HIV’,” she said.

It was an aunt who consoled her with the words: “You’re not the first and you won’t be the last.”

The aunt also encouraged her to get admitted to a hospice, where she stayed for three months.

Since leaving the hospice, the survivor said that her life has changed dramatically.

She made a concerted effort to take her medication, even when she felt fatigued and burdened as a result, and has remained viral-suppressed for 21 years, the woman told The Gleaner.

During this time, she gave birth to two HIV-negative children, who she said keep her busy and happy.

She now works with an organisation mandated to provide assistance to HIV-positive persons. In many ways, she said, her HIV diagnosis has shaped her life, telling The Gleaner, “I don’t know what my life would have been if I didn’t have HIV. I don’t know … . I am living positively and I’m thinking positively.”

She remains conscious of the fact that things could have turned out quite differently with her diagnosis.

In 2000 when she was infected, more than 600 people reportedly died from HIV/AIDS, according to local data from the Ministry of Health’s epidemiological profile.

She is sometimes still haunted by the thought that someone would put her life at such risk without fear of being punished.

“If you willingly give that [to a] person, I think they should be prosecuted,” she said.

Currently, there is no law in Jamaica which makes it a criminal offence for persons to wilfully and knowingly spread HIV.

“If you know you positive and you want to be in a relationship, I think you should disclose to to the person your status if the person is not positive,” the woman said.