Holness vows to get tough on litterbugs 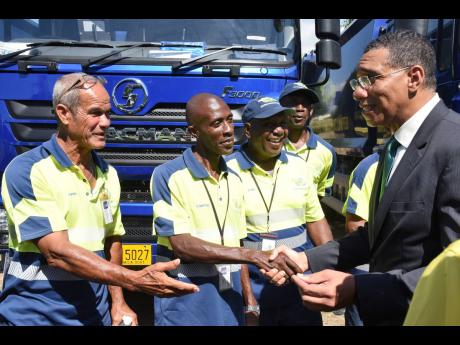 Labelling the garbage disposal practices of some Jamaicans as “antisocial behaviour”, Prime Minister Andrew Holness is promising stronger enforcement of laws to address how waste is managed.

Speaking at Wednesday’s handover ceremony of 50 garbage trucks valued at US$6.9 million (J$1.06 billion) to the National Solid Waste Management Authority (NSWMA), Holness indicated that, by next year, relevant legislation will be in place to address garbage disposal issues.

“For too long, we have allowed the antisocial behaviour of waste management and disposal to go untreated. We are now making a serious effort not only to develop the waste-collection capability, but the enforcement capability,” the prime minister said as 10 bikes were also delivered to the agency to facilitate the mobilisation of enforcement officers for the first time.

“The Government has a duty to make laws that will change behaviour and to enforce those laws to punish those antisocial behaviours that pose a threat to the society as a whole,” he stressed, noting that citizens have a civic responsibility to keep the country clean.

The remaining eight units will form part of a roving team.

Finance Minister Dr Nigel Clarke said that provision has been made in the 2023-2024 Budget for 50 more garbage trucks to be acquired.

NSWMA Chairman Dennis Chung is calling for legislation to urgently increase the fines for littering.

“We issue over 300 [sanctions] every year, but when you’re talking about an average fine of $3,000, it costs you less to break the law than to dispose of your garbage properly, and this has been caught up in the bureaucracy [for] over 10 years,” he said.

Lamenting the public backlash the NSWMA endured in recent months because of an islandwide backlog in garbage collection, Chung said that a “cumbersome” procurement process was partly to be blamed for the crisis.

“If we did not have those trucks from 2016, the time that it took us to get those trucks, we’d have a serious health problem. We have to find a way to shorten the process, especially in emergency situations like this. We cannot be so bureaucratic. I think the cost is greater than what we are trying to avoid,” he said.

Nonetheless, he said that the NSWMA is committed to “one of the cleanest Christmases”, stressing the need for Jamaicans to also take personal responsibility.

“If Jamaicans do not dispose of our garbage properly, then we’ll never have enough trucks,” Chung said.

Local Government Minister Desmond McKenzie said that the now 129-unit fleet of garbage trucks will make it easier for his ministry to deliver on its pledge to keep the country clean.