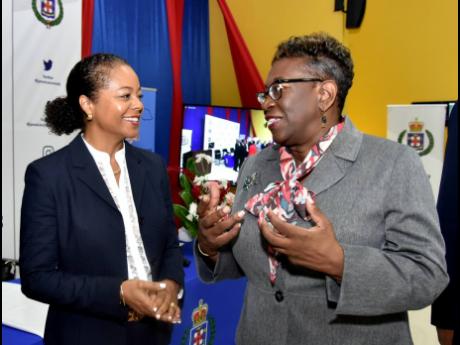 Minister of Legal and Constitutional Affairs Marlene Malahoo Forte on Thursday sounded a warning to thugs who threaten or intimidate persons by claiming to have a gun, noting that the new firearms law makes provision for them to be prosecuted. She...

Minister of Legal and Constitutional Affairs Marlene Malahoo Forte on Thursday sounded a warning to thugs who threaten or intimidate persons by claiming to have a gun, noting that the new firearms law makes provision for them to be prosecuted.

She made reference to Section 18 of the new firearms law that speaks to persons seeking unlawful benefit by professing to have a firearm or access to a firearm.

“In many communities, you will have the criminals who walk about telling the citizens that they must comply because they have a firearm in their waist and all kind of things,” she said. “I want to say to those who think that it is business as usual, those days are fast disappearing. Every law that is coming out of the Parliament is well thought out.”

Marlene Malahoo Forte made the comments as she addressed Jamaica Constabulary Force (JCF) investigators at a two-day police conference to sensitise members of the JCF on the new Firearms (Prohibition, Restriction and Regulation) Act 2022.

The conference is being held at the National Police College of Jamaica in Twickenham Park, St Catherine.

The minister also lamented “unfortunate” comments made at times about prosecutors and investigators in the nation’s courts, which serve to demoralise them.

Malahoo Forte, who once presided as a judge, said that, although she was no longer on the bench, she pays keen attention to matters before the courts.

“I find it unfortunate sometimes when I hear comments coming out of the court on the conduct of the prosecutors, on the conduct of investigators, because, while I understand that there is a standard, ... it has to be proven beyond a reasonable doubt; comments should not demoralise the force,” she said.

“... It is my hope that, going forward, whatever the issues that exist in the presentation of cases, whatever the concerns that are raised, that they [are] raised in a way that does not embolden criminals ... or demoralise the force,” she added.

Commenting on the legislation, which carries a minimum sentence of 15 years for illegal possession of firearm and ammunition, Malahoo Forte said that, when the law was being crafted, claims had been made about the mandatory sentencing provision being unconstitutional.

“Everything that the Government is trying to do to deal with the high crime rate is tagged by some as unconstitutional,” she said.

The minister said that many Jamaicans who understand the problem being faced by illegal firearms are happy for the stiff sentences for this crime.

However, Malahoo Forte cautioned that heavy sentences can only be handed down by the courts after a proper investigation which results in a conviction.

She stressed that compelling evidence cannot be adduced without proper investigation.