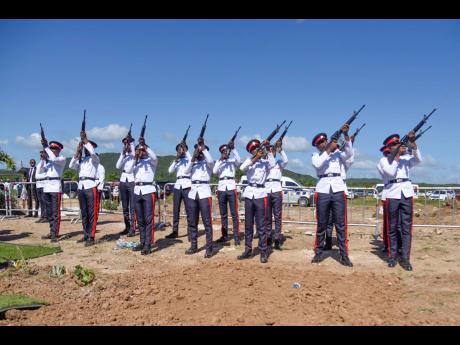 Nicholas Nunes/Photographer
Members of the Jamaica Constabulary Force participate in a gun salute in honour of late police Corporal Oliver Mullings at Thetford Park Cemetery in St Catherine on Sunday. 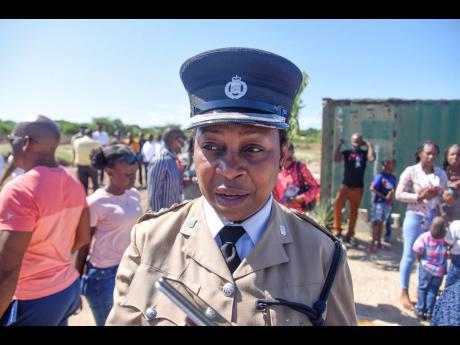 Nicholas Nunes/Photographer
Senior Superintendent of Police Stephanie Lindsay: “We want for him to have the highest honour which is deserving of someone who has made the ultimate sacrifice.” 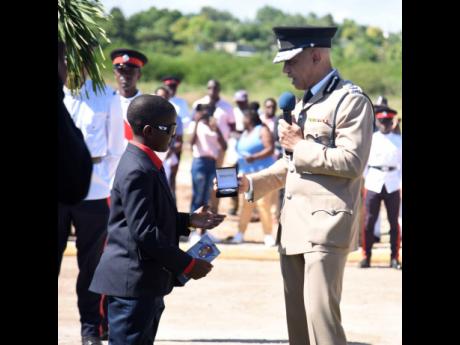 Nicholas Nunes/Photographer
Commissioner of Police Major General Antony Anderson hands Oliver Mullings III, son of late Corporal Oliver Mullings, the Commissioner's Coin of Excellence at the unveiling of the headstone and gun salute for the slain cop at Thetford Park Cemetery in St Catherine on Sunday.
1
2
3

The Jamaica Constabulary Force (JCF) made amends on Sunday for the gun salute blunder that marred the funeral of Corporal Oliver Mullings, which drew the ire of Police Commissioner Antony Anderson and caused an investigation to be launched.

“It was from then that his professionalism, commitment, and Christian principles were manifestly clear,” Williams said of his former training pal.

“Although he is buried, the sad news of October 20, 2022, still haunts me. It is a very sad thing to have someone with so much potential meeting such a demise.”

Mullings was shot and killed by gunmen during a security operation in the Kingston Western Police Division last month.

A scheduled gun salute at his November 27 funeral did not materialise.

But at a service held in his honour at Thetford Cemetery in Old Harbour, the silence was shattered about high noon as police personnel fired three salvos in recognition of the 18-year force veteran.

“This should have happened last week, but better late than never,” said Raymond Deanes, a visitor.

Anderson emphasised that no disrespect was meant by the oversight.

Head of the constabulary information arm, Senior Superintendent of Police Stephanie Lindsay, said the late policeman was an asset to the JCF.

“As the commissioner indicated, we wanted to close this chapter on a part of the ceremony which was left off at the funeral,” Lindsay said. “We want for him to have the highest honour, which is deserving of someone who has made the ultimate sacrifice, by giving his life in service.”

Scores of senior police personnel converged to pay their respects to the late cop and his family.