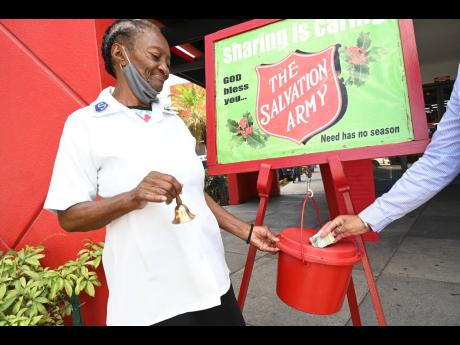 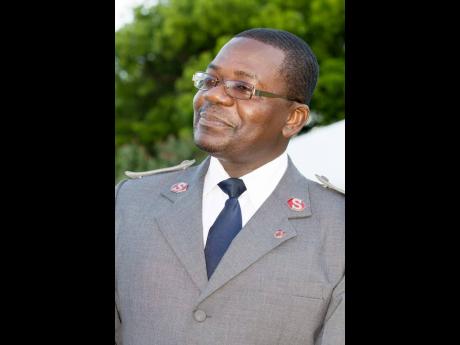 No need is too great for The Salvation Army to attempt to fulfil, says Major Nana Boakye-Agyemang, the divisional commander striving to boost the charity’s donations through its annual Christmas kettle initiative.

‘Donate Today – Be A Champion of Hope’ is the rallying theme as the organisation is aiming to raise $15 million this season through its outreach and collaboration with Scotiabank Jamaica, its primary partner for more than 20 years.

With more than 100 locations across the island, Boakye-Agyemang is banking on the customary generosity of Jamaicans to reach the target.

Some of the money raised, he told The Gleaner, will go towards food hampers for the less fortunate and gifts for donation to infirmaries and hospitals.

“This is not only about Christmas alone, but that we do have institutions like children’s homes that we support throughout the year,” he noted, adding that a portion of the funds also go to helping a home for the elderly and providing other daily humanitarian services.

Danielle Savory, manager of public affairs and communications at Scotiabank, told The Gleaner that the financial institution has always been committed to providing support for less fortunate communities.

“We found the sustained efforts of The Salvation Army, as well as the invaluable work that the organisation continues to do in communities across the island, to be extremely commendable and aligned to our mission,” she said.

Since 2002, Scotiabank has continued to be the primary sponsor of the annual fundraising initiative.

“Our annual contributions have been an increasing sum since the inception of the partnership,” she added.

To date, Scotiabank has donated approximately $15 million to the Salvation Army Christmas Kettle initiative, with $11.5 million of that sum donated over the past 10 years.

“We are certainly thrilled that our contributions have been able to make such a meaningful difference in the lives of our fellow Jamaicans,” she said.

She noted that cognisant of the increasing financial challenges families have been facing because of the pandemic, Scotiabank increased its contribution to the charity by 50 per cent in 2021.

Boakye-Agyemang confessed that one of the major challenges facing The Salvation Army is recruiting people to help collect donations.

“It has always been one of our biggest challenges. Imagine there is money out there, people want to donate, but some of the kettles are not even manned,” said the divisional commander.

Although he could not readily say exactly how many people are currently posted at the various locations, Boakye-Agyemang stated that the organisation is always in need of on-the-ground officers and has received assistance from members of service clubs and other volunteer organisations to ramp up its collection efforts.

“It will be a very worthy way of contributing if they just decide that their group were mandated for a particular time [for us] to receive them and that can be organised,” he said in an appeal for more groups to lend a hand.

Boakye-Agyemang said that The Salvation Army is mindful of the economic position of many citizens and entities and so it is very appreciative of those who continue to give their support in whatever way possible.

He added that the organisation is also exploring an online portal to accept donations.

How you can donate

Those willing to make a donation through bank transfer or counter deposits can do so to: