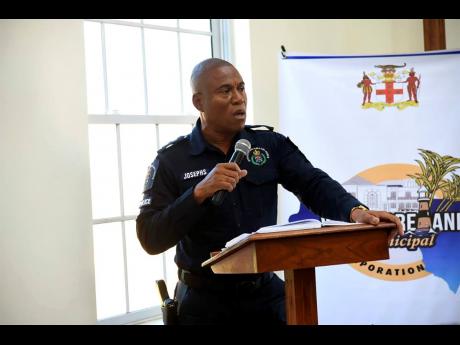 Josephs made the appeal amid news that more than 30 persons charged with shooting and murders are out on bail despite having multiple charges of the same nature.

Westmoreland has recorded 136 murders this year, an increase of 20 to the 116 committed over the corresponding period in 2021.

Josephs said that when he came to the parish, he and his team compiled a list of 32 persons charged with murder, shooting, and other serious crimes who allegedly committed the same offences when they were out on bail.

“I want to appeal to the judges because we have found that a lot of our criminals out there are repeat offenders,” the veteran crime fighter said while speaking with stakeholders at a recent meeting of the Rotary Club of Savanna-la-Mar.

“... While we know that the judges have independence and I don’t want to interfere with that independence, but we are appealing that when they are giving bail, they consider all the facts, consider the victims and relatives who are still living in the same space,” Josephs pleaded.

A joint select committee of parliament is now reviewing the Bail Act 2022 which was tabled in Parliament over a month ago and introduced new provisions that may deny bail to someone accused of committing murder within a zone of special operations (ZOSO), or in an area where a curfew or state of emergency has been declared.

Clause Seven indicates that where an offence for which a defendant is charged or convicted is punishable with imprisonment, the accused may be denied bail in certain circumstances.

Marlene Malahoo Forte, minister of legal and constitutional affairs, said recently that the proposed Bail Act would allow for bail to be granted at three stages – pre-charge in defined cases; post-charge, and post-conviction in defined cases.

The bill sets out the officials who would be able to grant bail – the judge, a justice of the peace, and a police constable who is neither the arresting officer nor an officer involved in the investigation of the offence.

In cases of pre-charge bail, this should be done by a police officer at the rank of or above superintendent. The question of bail in relation to a child is to be determined by the Children’s Court, in accordance with provisions in the Child Care and Protection Act.

Mickel Jackson, executive director for human-rights group Jamaicans for Justice (JFJ), last week called for the removal of Section 5 of the proposed Bail Act, which speaks to pre-charge bail, citing constitutional breaches, among other human-rights concerns.

The JFJ executive director argued that Section 5 facilitates the abuse of power by state officials and could cost taxpayers dearly.

“If it is that one’s right to liberty is abused in the way that we are seeing it, then we see that we may have certain constitutional challenges that may also cost taxpayers their money. That’s one practicality we have to look at,” Jackson noted in parliamentary discussions.

“There is no monetary compensation that can ever really assure someone who has not yet been charged to give them back their time what they have lost,” Jackson reasoned.

Jackson also said that the bill does not make provision for a ceiling to judges in setting fees when granting bail. Therefore, an accused person may not be able to take up bail owing to financial constraints.

“A person who is financially constrained may not be able to take up bail and we have seen in other jurisdictions where high bail fees fee have been used as a little loophole to ensure that persons remain in custody,” the human-rights lobby group executive added.