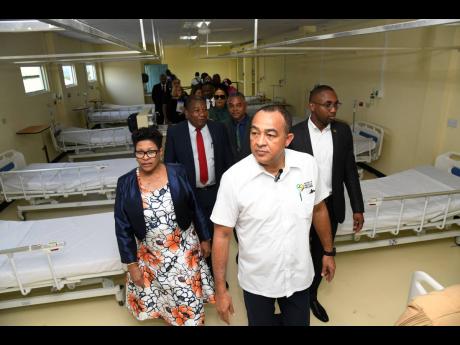 When the Chapelton Community Hospital was shuttered three years ago, 67-year-old Pancheta Russell rued having to seek care 19km (11.8 miles) away in the Clarendon capital of May Pen.

But her ties to Chapelton are beyond mere sentimentality, as she credits staff there for saving her life twice.

Tuesday’s reopening of the north-central Clarendon hospital rekindled joy for Russell and hundreds more patients after a $309-million renovation financed by a private funder and the Government.

“This will save me from going to May Pen, because in July, I got a heart attack and they sent me down there, and I was treated like a pig,” said Russell, who described service standards at Chapelton Community Hospital as traditionally high.

“Up yah so a di boom! I died two times and Dr Brennan assist me to the very best,” said Russell of Dr Desmond Brennan, People’s National Party caretaker for the Clarendon North Central constituency.

The Chapelton project was funded by a $132.6-million disbursement from the Culture, Health, Arts, Sports and Education Fund, $56.2 million from the National Health Fund, and a US$1-million donation from philanthropist Beverly Nichols through her Push-Start Foundation.

The full-scale rehabilitation was sparked by Nichols’ visit to the facility several years ago. Nichols said that conditions were “unacceptable”.

Services at Chapelton were relocated to Summerfield Health Centre in 2019.

Like Russell, Andrea Prince of Wood Hall lamented the costly trips to other facilities for treatment.

Additional expenses for Wood Hall residents could range from $200 to May Pen or $800 to Spaldings.

“When the hospital closed down, it was so hard, ‘cause we had to go Summerfield or May Pen, and sometimes we nuh have the fare. I am very, very glad ... because it nearer and won’t cost we no whole heap a money fi fare,” Prince told The Gleaner.

Pennants resident Vivienne Davis said the hospital’s temporary closure had her on tenterhooks over her health, as she was a patient at Chapelton’s clinic. Davis cited several inconveniences at Summerfield Health Centre.

“When the hospital was down, it was desolation. Sometimes you down there and you had to be in the sun, and sometimes rain start fall, the tarpaulin blow ... ; it wasn’t nice,” Davis said in a Gleaner interview.

Donor Beverly Nichols, in whose honour a section of the hospital has been named, said the facility is sentimental to her, having been raised in the neighbouring community of Blackwoods.

“A few years ago, my sister Audrey and I came to the facility here, and after a tour, I stood outside, and I was dazed. I looked to my right and there was the head nurse Stella, and I said to her, ‘The condition here is unacceptable,’ and I was going to do something about it.”

Nichols also donated US$100,000 for the construction of a dialysis centre at May Pen Hospital and US$25,000 to front-line workers during the COVID-19 pandemic.

Robert Nesta Morgan, member of parliament for Clarendon North Central, said the reopening of the hospital signals a significant milestone in the development of the constituency and the parish at large.

“It is a catalyst to spur the development in my community,” said Morgan.