WHY ST ANN'S UNDER SOE 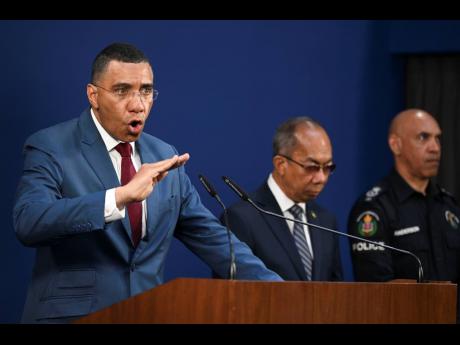 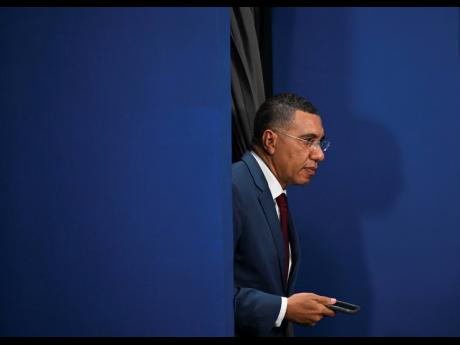 Ricardo Makyn/Chief Photo Editor
Prime Minister Andrew Holness makes his way into the Jamaica House press conference where he announced the declaration of states of public emergency in eight parishes on Tuesday.
1
2

A security crackdown has been imposed on St Ann to head off migratory offenders fleeing state of emergency (SOE) hotspots to the parish, which has already recorded a 38 per cent year-on-year increase in major crimes. That assessment...

A security crackdown has been imposed on St Ann to head off migratory offenders fleeing state of emergency (SOE) hotspots to the parish, which has already recorded a 38 per cent year-on-year increase in major crimes.

That assessment by divisional commander, Senior Superintendent Dwight Powell, came hours after Prime Minister Andrew Holness announced a fresh round of SOEs in eight parishes just over a week after opposition senators blocked an extension of the 14-day security measure on November 25.

In a show of force on Tuesday, Holness reimposed SOEs for Clarendon, St Catherine, St James, Westmoreland, Hanover, and sections of Kingston and St Andrew.

“It was prudent for the Police High Command, based on the migration of criminals outside of the other places and the fact that St Ann is seeing a marginal increase in major crimes, that we be included,” Powell noted in a Gleaner interview.

“Criminal migration is like squeezing a balloon. So wherever you put the pressure ... ," he said, trailing off. "You know you had a couple states of emergency before this one in couple parishes. So, we have [SOEs] in couple parishes; in western parishes, in central parishes and a couple eastern parishes. So, wherever criminals can find safe haven, they will migrate. That is what we don't want in St Ann. St Ann is not a place where we welcome migrating criminals,” the senior superintendent added.

The St Ann Chamber of Commerce and the parish chapter of the Jamaica Hotel and Tourist Association (JHTA) voiced support for the SOE, concluding that it should ease the fear of the business community and residents.

“Jamaicans have been filled with anxiety and fear because of crime in St Ann,” Chamber President Dr Ransford Davidson told The Gleaner.

He said while the SOE may affect business, he accepted that it was being implemented in the best interest of the northern Jamaica parish.

Vana Taylor, chairman of the JHTA's Ocho Rios-Runaway Bay chapter, said a meeting of stakeholders on Tuesday ended in support for the measure.

“Once it means crime is going to be less, we're supporting it,” Taylor said, adding that a serious disruption in business was not anticipated.

“We're all going to work together to ensure it works well for our parish and Jamaica,” she added.

Meanwhile, the police commissioner said there has been a reduction in overall murders from 6.8 per cent to 3.6 per cent since the declaration of the SOEs on November 15.

He said in the two weeks prior to the declaration of the crackdown, the country's recorded 36 and 28 murders, respectively.

The police chief said the two weeks of SOEs that followed registered 14 and 11 murders, respectively.

Additionally, he said the week that followed the expiration of the SOEs recorded 27 murders.

“At the end of the 14-day period, the divisions where the states of public emergency were in effect recorded an overall 64 per cent decline in murders. That is 17 murders compared to 47 that were recorded,” Anderson disclosed.

At the same time, Holness has indicated that he will continue to impose SOEs where needed while his administration works to reverse a 30-year build-up of violent crimes.

The pronouncement came in a 14-minute-long salvo in which Holness hammered Opposition Leader Mark Golding and “political activists” averse to several regulations under the current Emergency Powers Act that governs the use of SOEs.